Share All sharing options for: Keane returns to Spurs 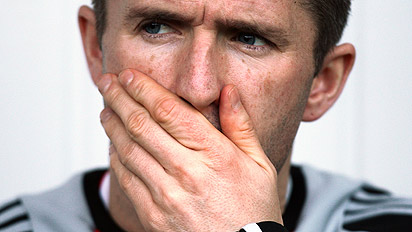 Robbie Keane has returned to Spurs after just half a season that has promised so much, but delivered so little. Following a dream move to Liverpool, which Robbo has supported as a young lad, he didn't manage to win Rafa's favour and probably saved his career from further anguish by moving back to Spurs.
Conspiracy theories abound regarding the circumstances in which Robbo left Anfield.

1) Was he a pawn in a power struggle between Rafa, Parry & the Owners?
2) He wasn't performing well enough to fit his 20-million-pound price tag?
3) Insert your own ridiculous reason here

It is a known fact that Rafa's 1st choice target during the summer was Barry. That boy will probably be counting his lucky stars it's not him being pushed around like an unwanted baby.

Regardless of all the conspiracy theories, I am beginning to have certain concerns.

1) With Robbo gone, we have only Kuyt as a proper striker in the event that El Nino gets injured/suspended/overworked. Egg Nog just don't cut it. Even then, Kuyt will never be as prolific as Nando, I feel.
2) We just lost about £5m on this deal.
3) What's with Benitez saying things to the effect of Keane's value will drop to about £10m at the end of the season when he just signed Keane for £20m at the start of the season? Doesn't seem exactly like a great deal to have your purchase depreciate by half after just a year! (Someone please enlighten me on this!) Is this just some excuse cooked up when he was taking a crap that morning?
4) Benching Robbo after he scored 2 in a match just isn't giving the boy a sporting chance, I feel.

All things said and done, somehow I feel relieved that Keane has moved back to a club where he is treated as he deserves. A class act and a hero. I haven't heard any whining or complaints about the way he was treated by the Club. A true professional.

I trust I speak for most of us when we wish Robbie all the best in White Hart Lane.