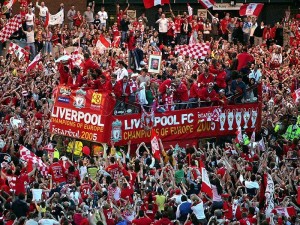 If Liverpool weren't so damned consistent in European competition this would be maddening. Fans have seen this year after year--disappointing results in league followed closely by ecstasy in the Champions League, particularly in the round of 16. In the magical run of 2005, losses to Birmingham City (2-0) and Newcastle (1-0) directly preceded twin 3-1 victories over Bayer Leverkusen in the first knockout stage. Three years ago it was a 0-0 draw in the Merseyside derby followed by a 2-1 loss to Newcastle that came before one of the great European results for Liverpool at the Nou Camp. Last year it was a 0-0 draw with Chelsea and a dismal loss to Barnsley at home in the FA Cup that were followed

by a 2-1 victory against Inter. And this year, a title-crushing 1-1 home draw with Man City that comes before a 1-0 win at the Bernabeu. Something about Liverpool--tactics, effort, atmosphere--makes the Champions League a completely different animal. It's almost comical that Liverpool won 4 of 5 in league and domestic cup competitions around the 3-0 aggregate defeat to Benfica in the round of 16 in 2006, the only year in the past four they've trailed after the first leg of the round of 16.

So what does this mean? Probably absolutely nothing. But it's a tribute to Liverpool's competence in European competition under Rafa Benitez that they are able to rebound so quickly from disappointing league/domestic cup results and churn out impressive performance after impressive performance. It's no secret that Rafa's tactics suit cup competitions well, but especially this year, the only one in a long while that Liverpool have sustained somewhat of a title challenge, the performances in Europe were under the microscope. Today things reached a fever pitch--bookies held off bets on Rafa leaving, which obviously meant that it was bound to happen. This triggered a vehement denial from club officials, calling the rumors "ridiculous." In other words, a completely normal build-up for your run-of-the-mill Wednesday evening fixture.

On to the main event, then. And in all honesty, not the prettiest of displays. Real Madrid dominated possession and looked the more threatening in attack at times, but did not exactly have their finest 90 minutes. Torres and Benayoun both had chances, but had either scored it would have been spectacular. Robben posed the biggest threat to Liverpool's defense, but luckily he seems to enjoy dribbling an awful lot, which more often than not lead to cutting back towards the middle, where Liverpool were not looking the least bit vulnerable. Mascherano finally had a performance to be content with--he was strong in the tackle and got up and down the pitch well. Xabi had another steady performance and nearly had another special, this time at the end of the first half, forcing Iker Casillas to tip over, which for some reason did not lead to a corner. 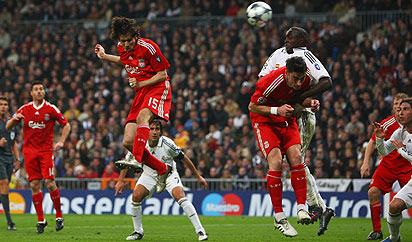 The night really belonged to Yossi Benayoun though, who had another great performance on the wing. He cut in at the right times, maintained possession, and showed good ball control. His header in the 82nd, while a result of some suspect defending, was a fitting end to his night. If he remains consistent, he can add another dimension to this Liverpool side that has been lacking and should present a large challenge to Rafa's loyalty to Kuyt when the side is at full strength. This covered up a somewhat disappointing performance by Torres, who had Pepe nipping at his heels all night and, save for the chance early in the first half, posed no real threat. Not to mention he's now apparently been ruled out for the weekend.

A win's a win, and away to Real Madrid it seems much more than just a win. With all the rumors and pre-match speculation, anything less than a win could have been the tipping point. Not much space to feel that things are over, though, as Real has shown recently that they are capable of getting a result anywhere. Especially with the way Liverpool have played at home this year, a 1-0 result is not a ton of breathing room. For the time being, though, 1-0 is more than enough. Back to reality soon, but not just yet.