The biggest fixture in the history of the world ever, or at least on Wednesday night in Madrid, pits the surging Real Madrid against the surging over their last two European matches Liverpool. Granted those matches took place two months ago, but Liverpool looked good. There's little to be said about this match that hasn't been already-Rafa is fighting for his managerial career (which may be over today?), Rafa and Juande are fighting for the Real job, Torres returns to the city of Madrid, Pepe is going to knock the s*#t out of Torres, and all the while I'll be in two different meetings during the match. Terrific. 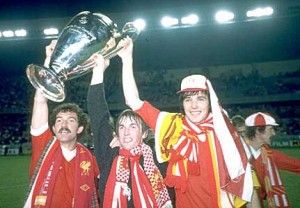 With Gerrard on the bench, I don't see the 4-2-3-1 playing out today. A 4-4-2 allows Liverpool to play more conservatively, which will likely be the case. Liverpool will look to scratch one on the counter and otherwise defend from here to eternity. It would be great to be proven wrong, but history tells me that Rafa will try to kill the game with possession. Liverpool have had success in the past being the underdog in first leg away fixtures in the last 16 of the Champions League, but are now missing a driver-wielding Welshman. But with one matchup 28 years ago as my guide, I can safely say that it's looking good.

I'll be checking in sporadically to give some semi-live blogging...otherwise check out the Real Madrid live blog and cheer on the Reds.

Edit: that best guess at a formation was a bad guess. Looks like a 4-2-3-1 with Kuyt in the Gerrard role and Torres the lone man up top...expect some overlap with Benayoun and Kuyt. And how nice, Corey from Real Madrid Offside has wished us good luck! What a great sport!