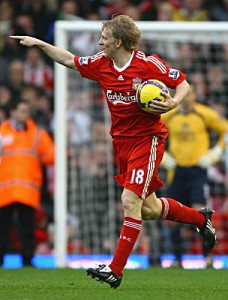 A match that we obviously had to win but simply couldn't find the goals. So often this season it's been a question of where the goals would come from, and too frequently there hasn't been an answer. With a 7-point gap at the top now, it's looking more and more that United actually are uncatchable. I'm still holding out hope, but my optimism is fading fast.

Mostly the same old story--Liverpool were able to maintain possession for long periods of play, had some legitimate chances, and defended well for the majority of the match. The glaring difference today was the lack of stability in central midfield. With no Alonso and Gerrard, we were often on the receiving end of central midfield dominance, and Kompany and De Jong bossed it for nearly the entire second half. Mascherano didn't have his best game, and Lucas didn't make any huge mistakes but was anonymous and had zero positive influence. This game was as clear an example as any how important Alonso has been.

Obviously we missed Gerrard, but Xabi consistently creates through the middle, and without him or Gerrard today our central midfield was a black hole.

As a result, we were pushed wide to find any sort of attacking threat. In fairness, this was one of the few games this year where I felt we looked competent wide, it's just too bad that it was a result of being inept in the center. Arbeloa had a solid game getting forward, but Dossena was again out of his depth. City's biggest breaks came when Dossena and Arbeloa were caught too far forward, leaving only Carragher and Skrtel at the back. Ireland had a great chance in the 30th minute after Robinho set him up, and luckily we weren't punished.

We eventually were punished in the 49th, and of course it was Craig Bellamy who was the instigator. Like I mentioned in the live blog, I was glad he didn't play it up, which seems out of character for him, but his shot deflected heavily off Arbeloa and flew past Reina. Our attack throughout the game came through Riera and Benayoun, who both looked dangerous in spurts, and Kuyt found himself on the flank more than a couple times. It was eventually Benayoun in the 78th who floated one in from the left to Torres, whose mis-hit fell to Kuyt, and the Ugly Dutchman poked it past Shay Given to pull even.

From that point on Liverpool attacked relentlessly and had more than a couple solid chances. Kuyt and Benayoun both hit piledrivers directly at Given, and it looked as though it would be another 3 points won late. Torres did well to get himself close to goal in the final minutes, but his cutback effort was cleared, and Aurelio's volley was well wide. Soon enough it was another 2 points gone.

If this game was remarkable for anything, I think it was for the lack of urgency by Liverpool for the first 80 minutes. With plenty of pre-game talk about a "must-win," we seemed disaffected for large spells. It was largely an average effort, particularly for most of the second half, when City had a 1-0 lead and the majority of possession. We were lucky not to concede a second, and again we relied on bit of good fortune to pull ourselves back into it. City's defense did a good job containing Torres, who played well but often found himself the center of two defenders' affections. One of the lone bright spots was the continued threat of Benayoun, and I'd be surprised if he didn't play a role in Madrid on Wednesday. Speaking of which, there's little time to hang our heads if we want something out of this season. With the Premier League title looking more and more unlikely, our efforts in Europe could be our saving grace.