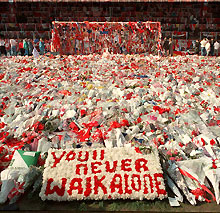 And now this. UEFA today denied the opportunity to acknowledge a significant date in Liverpool history, stating that they would not rule out the possibility of scheduling a CL quarterfinal on April 15th, the 20th anniversary of the Hillsborough disaster in which 96 people lost their lives.

Honestly, I haven't been a Liverpool supporter all that long and can't pretend to understand what the long-time fans have been through, particularly the fans who have lost loved ones as a result of what happened at Hillsborough. But I can say that it is damned impressive the lengths that LFC go to in order to recognize the significance of this date in our club's history, and it'll be a shame if UEFA play it off with a "we can't change it because it's the policy because it's the policy" excuse.

Tributes like this are all that is right in sport--too often these types of things can come off as contrived, superficial, even corny. But this is something genuine and it deserves special recognition.

Obviously we hope to be at a point where this type of accommodation is needed, but that's secondary to the fact that this is something anyone associated with football should respect.