Dearest Liverpool Offside readers, sorry for being MIA. Was on a 9 day leave from work, and Rock Band is taking over my life 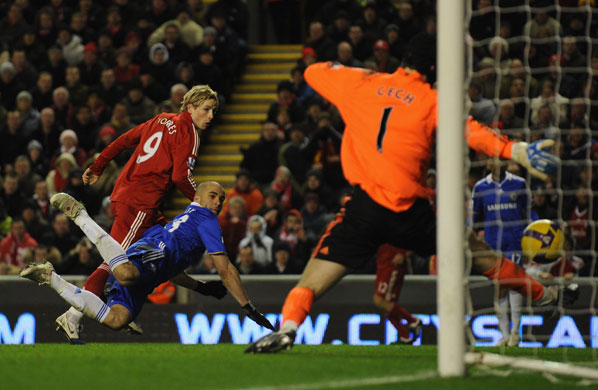 While one Rafa bagged the Australian Open title, the other Rafa scored a league double against Chel$ki, a feat last achieved in 1990. After drawing way too many games, dropping points unnecessarily and culpable of not finishing off weaker opponents, the Reds finally conjured their first win in 2009 and as blasphemous as this might sound, we have that bald, yellow-card lovin’ prick Mike Riley to thank, after he sent off Frank Lampard, whom in my opinion, had an anonymous game, up till that dubious "tackle" against Xabi Alonso at the hour mark. In all honesty, Lamps doesn’t deserve the card, not that I’ve suddenly become a Chel$ki lover overnight. Instead, he could have shown it to Unabrow Bosingwa for that harsh kick to Benayoun's lower back near the corner post, in front of the Kop and the linesman!?! Fact?

Remember August 2007? The day El-Nino opened his goal-scoring account in a Liverpool jersey, and what better way to haunt Chel$ki than to end his 8-month goal drought at Anfield with a brace in the 2nd half. Though Alex, arguably Chel$ki’s best player yesterday, managed to stop several goal attempts when all Petr Cech could do is spill the ball, Liverpool’s number 9 superbly headed in the ball from a Fabio Aurelio cross on the 89th minute. His second in the match came during injury time when Benayoun was dispossessed by Cashley, giving Torres the opportunity to slot in a rebound. Seems like all those Japanese cooking lessons are paying off.

Now before we could go on gloating about this lucky win (yes Liverpool did play well, but c’mon who are we kidding), let’s not forget we are still trailing Manures by 2 points and the Red Devils still have a game in hand. Things are still pretty much unsettled in the dressing room. Rafa has yet not signed his new contract; Agger is not being offered any. Keane, after being repeatedly snubbed, is probably in London waiting for medical examination at the Spurs training ground, as I’m typing this. We have to face our Blueshite neighbours (AGAIN) for a FA Cup 4th round replay…please, not another draw :\

On the bright side, Chickendinner thinks Liverpool will do just fine from now on. Comments?