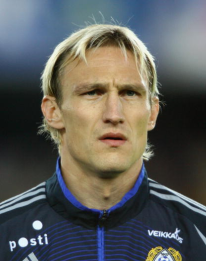 Before we get to all the players who will be taking part in internationals, let's just address the main concern up front. Phillipp Degen. No, not really, he's hurt for the fourteenth time this year.

But seriously, there is really no reason for Fernando Torres to take part in the friendly tomorrow against England. Being completely xenophobic, I have no idea of the implications of this match on the European world and don't care, but being a Liverpool fan, I have a great idea of the implications a fourth hamstring injury would have on our title hopes. He says he's ready and would love to notch a hat trick, and Vincente del Bosque seems to think that running him into the ground will help him get in "better shape." I say no. On a day when he is open-mouth kissing Liverpool fans everywhere by pledging his allegiance until the end of time, I'd say our collective psyche would be shattered if Torres crumpled to the pitch tomorrow in Sevilla. I can almost picture an overeager Matthew Upson crashing into Torres awkwardly, leaving him in a pile on the deck, left to self-soothe by tucking his hair behind his ears. Horrors.

Luckily Gerrard's ruled out, and Carragher has ruled himself way out, but we have a fair share of players involved over the coming week.

Slovakia--Martin Skrtel--Not sure if he figured into the 3-2 loss to the Ukraine today. If 5 goals are scored in a friendly tournament in Cyprus, do they make a sound? Apparently yes, but no info on our center back.

Ukraine (sort of)--Andriy Voronin--Similarly to the better-coiffed Skrtel, no info about his participation in the match. But he's ready to come back, but he's also ready to stay in Berlin. Thanks for clearing that up.

Italy--Andrea Dossena--Head removed from ass before Saturday's win at Portsmouth, came on in the 75th minute against Brazil.

Denmark--Daniel Agger--In the squad against Greece, but another one who could likely use an actual break.

Finland--Sami Hyypia--Sami will likely get his 96th cap against Oliver Twist and company.

Netherlands--Dirk Kuyt and Ryan Babel--People's Sexiest Man 2009 and the Dribbling Wonder are both likely to play against Tunisia.

Others--Plessis and N'Gog are in the France U21 squad.

Good luck to all of our players involved...here's looking at some meaningless minutes at about 16% effort.