Torres Up for FIFA Goal of the Year

Share All sharing options for: Torres Up for FIFA Goal of the Year 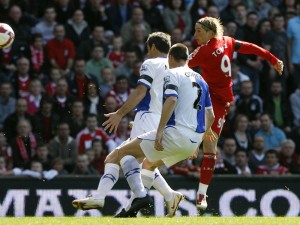 The creation of the Ferenc Puskas award was mentioned on the main page awhile back, and now voting has opened for the ten nominees. Fernando Torres' stroke of magic against Blackburn at Anfield is among those, as are strikes by Cristiano Ronaldo, Michael Essien, Emmanuel Adebayor, and Andres Iniesta (but we all know it was really Tom Ovrebo). You can view all the goals by clicking this link, and you can see Torres' below. Obviously my heart's with Torres, but if I'm honest there's little between most of them. But go ahead and vote for your favorite before December 14, or else absolutely nothing in your life will change. Hooray, pointless awards!

In less pointless news, Lucas is lauding Aquilani as the second coming. Which is encouraging, but also strange considering that Lucas is the one that most feel should be replaced by the Italian. Assuming that one day Aquilani is fully fit, I'm not sure that Lucas will be as loving. Maybe he's dumber than a box of rocks, or maybe he's confident enough that he won't be displaced by a match-fit Alberto Aquilani, who will presumably enter Anfield from the heavens on Wednesday, followed by a pre-match display of walking on water.

Ryan Babel is trying to claw his way back into Scouse hearts, denying that he conducted an exclusive interview with the S*n, stating instead that his words were with a Dutch newspaper, then taken out of context/fabricated. Wouldn't be the first time this has happened, and it's a smart move for him to release some sort of statement. Feels a bit delayed, though, considering that was nearly two weeks ago now, and he hasn't done much to ingratiate himself with the club on or off the pitch. However, I can't shake the feeling that with the right mindset and ample playing time, he could be something really special. On the pitch or the DJ booth. Either way I'm happy. Brrrrrrrrahhhhtt brrrrrahhhht.

And Pepe Reina, doing his best to mend my Xabiless heart, blatantly contradicts Rafa Benitez by saying that points are more important than clean sheets. I think this is terrific--no gloss, no attempts at a positive spin, clearly putting the team's results of any sort of personal accolades. Shouldn't come as a surprise, considering this is the man who labeled Liverpool's Champions League performance a "disgrace" a month ago. I'd love to hear more of this type of candor coming out of Anfield, especially when it's someone performing at such a high level. There's a certain amount of realism that's needed for Liverpool right now, and seemingly Reina's the one to provide it.

Wednesday creeps closer, and regardless of the implications (or lack thereof), it's a European night at Anfield. I hope that we'll see the boys close their Champions League campaign with a win, particularly to try to gain some much-needed momentum before Arsenal visits on Sunday. Which, by the way, will be celebrated by Martin and myself with a Liveblog extravaganza. And me drinking at 9:00am.