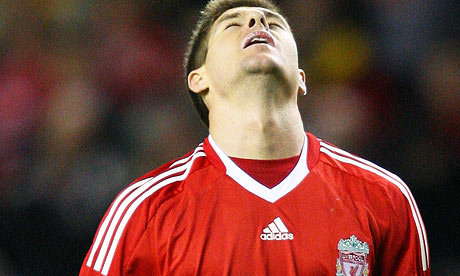 Getting all three points at Ewood Park was always going to be a challenge, but after having to watch the first half, I would have gladly settled for a point just to not have to watch another 45 minutes. There was, quite literally, nothing of interest for either side. Watching the first half highlights was comical--the most threatening piece of attack for Liverpool was a Steven Gerrard shot towards goal from the right side that took a deflection and bounded out for a corner. Chance had!

It's not as though Blackburn were much better, but it was very disappointing stuff in the first half for a Liverpool side that were, supposedly, nearing full fitness. The play on the wings was inept and the midfield was often cluttered. Gerrard found himself with possession in Liverpool's own half more than a handful of times. Riera, Benayoun, and Kuyt managed to jumble themselves up front...optimistically I'd call it overlapping/interchanging, but there seemed to be little rhyme or reason to their movement. I can't believe that Riera is fully fit, as he looked out of sorts for nearly all of the 52 minutes that he was on the pitch.

Thankfully the second half was a bit more aesthetically pleasing, although in the end there was no return. The substitution of Ngog for Riera was no surprise, given the poor play/injury(?) of Riera and the recent encouraging performances of the young Frenchman. Pushing Kuyt wide left, though, was a curious decision, as he lacks the pace and skill to cut inside with any sort of threat. Likewise, Benayoun was not as convincing on the right, and it was mostly up to Glen Johnson to create from that side of the pitch.

Gerrard was able to exert his influence, first firing a shot at goal from 25 yards in the 55th minute, then creating a half-chance for Dirk Kuyt in the middle of the box just minutes later. Obviously the finest chance of the match occurred in the 71st minute, when Glen Johnson burst through the Blackburn defense and crossed superbly for David Ngog. The ball seemingly took a deflection or a wicked bounce, and came up just a bit, and Ngog was unable to get on top, crashing an effort into the crossbar. The rebound fell to Dirk Kuyt, whose shot from the edge of the box was blocked expertly by Samba. To that point it was the chance of the game, and unfortunately nothing better was to come.

Liverpool have to be thankful that Blackburn were unable to take their chances, or else we'd be talking about three points lost instead of two. Di Santo clearly lacked composure when he found himself one-on-one with Reina, allowing Carra to track back and clear the ball away. Benni McCarthy also had a chance from the edge of the box but fizzed wide, and Nikola Kalinic scuffed one after some pressure from Pepe Reina. Likely not Rovers' performance of the season, but they'll surely be happy with the point.

A point for Liverpool, however, is disappointing. Despite looking more positive in the second half, they were unable to find a consistent flow and were punished for it. While Ngog looked decent after coming on, it's clear that without Fernando Torres, a serious forward threat will be hard to come by. The side put forth by Rafa today was well-suited to get a clean sheet, but it was also a side that was well-suited to struggle in attack.

Apparently we'll see Aquilani midweek against Fiorentina, which hopefully means more regular appearances. Liverpool are desperately in need of creativity in attack, and he's supposed to be the man to do it.