Thoughts on Villa and Aquilani

Share All sharing options for: Thoughts on Villa and Aquilani 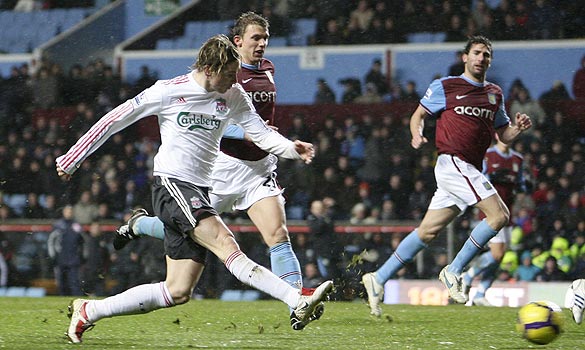 After another night of flying and family, it wasn't possible to get something up. But since I know everyone's concerned, I was able to pry a suitcase full of gifts from my immediate family. I've also gained fifteen pounds in the last six days, so any virtual doorway to this site might need to be expanded. Did you know you can put ice cream, chocolate syrup, and sticks of butter on French toast?

But any pounds I gained before yesterday were shivered off in the 95 minutes that Liverpool and Villa were on the snow-covered pitch. As I wrote in the pre-game post, it was a somewhat supernatural start to the broadcast. Both teams left the tunnel in what the British press has termed "blizzard-like condtions" (*Wisconsin resident note: this was definitively not a blizzard. Try on -40 with sideways snow and having to enter your car from the rear-passenger door. Blizzard.). Add into this the Villa Park entrance music, "Escape" by Craig Armstrong, and it was goosebump material. Whether it was the atmosphere, the timing, or the implications for the table, it was clear that this was a big-time match for Liverpool.

What unfolded over the next 92 minutes, however, was not exactly big-time. Don't get me wrong, Liverpool looked as dangerous as they have in months during the first twenty minutes. But neither side could find a break-through despite a few legitimate chances, including a Gerrard special that Brad Friedel saved expertly. Shades of Marseille last season without the goal. Likewise, Villa pressured the Reds at times, and Pepe Reina was forced into action in the 30th minute. Surprise, surprise, it was on a set piece.

A long corner found Stuart Downing completely unmarked at the backpost. We're talking screw himself into the ground and unwind on the volley amounts of time. Luckily he hit his shot about as pure as can be, and as Robbie Earle put it, if he mishits it, it likely goes in. Reina flashed his right arm out, and the arrowed volley ricocheted out for another corner. Whether it was reflexes or luck, it was surely a pivotal save. With Liverpool looking particularly frail this season, if that one goes in, it would have been heartbreaking. As it were, Pepe Reina undressed Emiliano Insua and Dirk Kuyt for allowing Downing to drift into acres of space, and on the whole it was disaster avoided.

The second half was perhaps less remarkable, with the only real threats coming from a spell of Villa chances during the last quarter-hour. Agbonlahor forced Reina into a good save at the near post, John Carew almost nicked in a header, and there were loud shouts for a handball after Insua headed one off his arm. Never a penalty, but in those conditions it wouldn't have been a shocker. Liverpool's best chance came in the way of a Ryan Babel whiff on an open header in the 81st minute. It was a nice change of pace, though, as he usually whiffs with his feet. Zing!

As injury time crept on it looked like the teams were destined to split the points, but all it took was a few moments of chaos for Liverpool to steal all three. Stevie Warnock's lazy backpass was collected by Dirk Kuyt on the right side, and the Dutchman found Yossi Benayoun, who dribbled centrally in search of space. Gabby Agbonlahor back-tracked and dispossed Benayoun, but as luck would have it, the tackle pushed the ball straight to a forward-drifting Fernando Torres. The seconds it took him to gather and fire past Friedel were agonizing, but he made no mistake and killed off Villa. Quickest to 50 goals for Liverpool in the Premier League, and another winner. Simply unbelievable stuff, given Liverpool's inability to create goals this season and the club's newfound tendency to hang their heads when things haven't gone their way.

I don't want to overemphasize the win yesterday, but I can't help but feel that it's going to be a major boost for the club as they fight their way back into Premier League relevance. Maybe that's one of the things that's been most difficult to swallow--Liverpool were, and quite possibly still are, on the brink of being an irrelevant club for this season. Most of the notoriety this year has come from protests about the owners, performing poorly and losing points, or who the biggest bust is. Three points against a resolute Villa side starts to chip away at the building obsolete nature of Liverpool's season. It's a long way to go, but yesterday showed that this club, with these players, in this season, can still grind out quality results when they need it most. Time for tempered expectations, sure, but also some time for optimism.

Now it's a matter of replicating this type of result...which doesn't necessarily mean replicating the performance. Liverpool continued to struggle linking the midfield with attack, and at times they were a bit reckless in possession. Set pieces conspired against my blood pressure and defending on the whole was a bit suspect. I'll take Pepe Reina any day of the week, though, who's got to be a favorite for the player of the season. Save for a few vintage suicide runs, he's been at the peak of form this season.

As the title implies, I wanted to include a note on Aquilani before the closeout. Interesting comment from daniel in the run-up post about the way in which Rafa is using Aquilani. I've been appalled at the fallout from his performance yesterday. It's not uncommon to read that he's a bust, a waste of money, and he'll never fill the shoes of Xabi Alonso. In his second Premier League start. I'd be interested to hear from more Roma fans about how he's been used most effectively in the past. I honestly knew little about him prior to his arrival at Liverpool, but I'm certain that the type of impact the press is looking for is attainable only after walking on water. The task of linking Liverpool's defense with attack is not an easy one, particularly when central midfield has often been a swirling vortex of lateral passing. When he pushes forward, especially on days like yesterday, Aquilani is then asked to distribute between no less than four attacking players who apparently have license to move wherever they please in the final third. Benayoun and Kuyt overlap and interchange, Gerrard is given free reign over everything in attack, and it's not uncommon to see Torres floating any and everywhere around the box. It is simply too much to expect that in two starts he'll have cured what ails Liverpool, and I think we saw some early struggles yesterday. We also saw composure and creativity in distribution, but with a role that is arguably the most complex in Liverpool's side, it was never going to be a quick fix. Any talk about "bust" or "flop" is absurd.

Some late-breaking news today, and it's not good. Glen Johnson is apparently out for up to three months with ligament damage suffered yesterday. This is awful news for Johnson, as it may hurt his chances at the World Cup. He's struggled at times for the club recently, but his presence on the right side has been mostly positive. Hoping that he's able to make a quick recovery. The most likely outcome here is Carra deputizing at right back, with Skrtel and Agger partnering in the center. I'll put out the APB for Martin Kelly as well.

Lastly, well wishes to Edwin van der Sar's wife, who apparently suffered a brain hemorrhage earlier this week. Got to be scary stuff for the United man, and here's hoping she makes a full recovery.