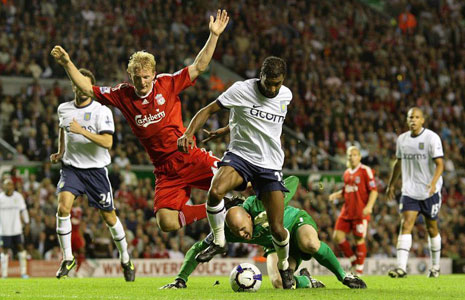 Something kind of eerie about the entrance scene today, snow falling heavily, "Escape" blaring on the speakers...

Stevie Warnock does his best to convince himself that he's over the slights from Rafa in 2005...I'm not buying it. But I like the sentiment. On another note, it wouldn't be bad to have him around. He did well at Blackburn, and has been a cog in the Aston Villa push this season. Insua's performed well, but with his youth and Aurelio's fitness, another left-back would have been good.

Rafa is raring to go! Hyperbole! Cliche about fighting! Statement about experience! The players have quality! Etc.!

Empire of the Kop has this one as a make-or-break match...and it's tough to disagree. I mentioned something similar yesterday, and the thought of entering 2010 so far out of the Champions League discussion would be a major disappointment. But read the previous link. Optimism! Excitement! Looking up at Birmingham City!

Everyone's favorite neckless Italian left-back cum left-winger is staying put...cue crickets. I'm more interested in the discussion that took place when Glen Johnson took his number. Did Dossena put up a fight? Did he demand compensation? Did the team officials forget about him and just give it away? These are the things that keep me up at night. Anyhow, whatever money could be gained from his sale would be good. Maybe the club could invest in another young starlet from an Eastern European country, then he could flounder in the youth system and be denied a chance at first team football, then be loaned out where he experiences marginal success due to lack of match fitness and zero confidence.

Jose Mourinho and Inter are laying in wait for Steven Gerrard should Liverpool fail to qualify for next season's Champions League. There's been plenty of talk in the papers about both Torres and Gerrard taking off, mostly from News of the World, but I can't see both leaving. Or either. But he should probably talk to Stan Collymore, who's clearly an authority on the situation.

Plenty more to come as the day progresses, kickoff in a few hours now.