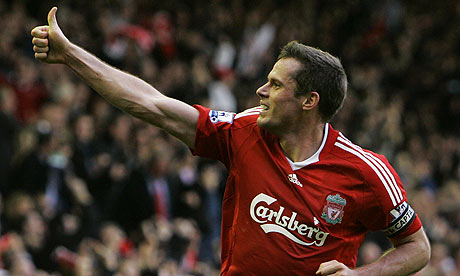 Starting eleven and squad lists after the jump.

Obviously a somewhat packed news day for European football, with the draws for the Champions League and Europa League. Besides that part about not being in the Champions League draw, things went about as well as they could have for Liverpool. Avoided the big names, and while the opponent is unfamiliar, it's a winnable tie for the Reds. The Europa league draw actually produced some decent match-ups, but the story of the day has to be some of the ties yielded by the completely unplanned Champions League draw. Beckham back at Old Trafford? Jose back at the Bridge? A manager named Slutski traveling to the most promiscuous city in all of Spain? Dynamite stuff.

The focus abruptly shifts back to the Premier League, however, with only a two day lay-off for Rafa's men. Luckily Liverpool escaped the midweek clash with Wigan sans new injuries, and the club are boosted by the return of former Portsmouth man Glen Johnson.

Last season's fixture at Fratton Park was absolutely remarkable, with Liverpool coming out on top 3-2. Won at the death by a Fernando Torres header (and a celebration brought to you by the letter "P"), it was a breathless second half that saw Liverpool's fighting spirit at it's best.

This season Portsmouth are a vastly different side. They currently sit rock-bottom of the table, five points away from safety. Avoiding promotion has got to be the goal for Avram Grant's side, and of late they've been able to turn in more positive performances. They gave Chelsea a bit of a scare on Tuesday, drew away to Sunderland, and won their last home fixture 2-0 against Burnley. Long(ish)-time Liverpool fullback Steve Finnan has featured more consistently for the south coast side, and Kevin Prince Boateng seems to be a man on the rise. Jamie O'Hara has also turned in good performances while on loan from Tottenham, and the immortal Kanu could feature as well.

For Liverpool it's the second straight match in which fitness is, at least on the surface, not a major issue. The biggest news for Liverpool is that when he takes the pitch tomorrow, Jamie Carragher will be celebrating his 600th appearance for the club. Fantastic for the Scouse man, turning in solid performance after solid performance. He had his troubles earlier this year, but of late he seems to have righted the ship and formed a good partnership with Daniel Agger. One of the few men in the side whose effort, loyalty, and passion for the shirt can never be questioned.

I'm expecting a bit of a shake-up in the starting eleven, most likely a return to Rafa's first-choice eleven at the beginning of the season. The return of Glen Johnson pushes Carra back centrally and Skrtel to the bench, while Fabio Aurelio will likely drop into the left-back role. Although I'd love to see Alberto Aquilani in place of Lucas, I'm doubtful that he'll find himself starting. So long as everyone else is fit, the 4-2-3-1 looks to return, hopefully with a certain amount of gusto.

Fratton Park is never an easy place to visit, and despite their spot in the cellar, Portsmouth can be optimistic about their chances to nick a point tomorrow. Liverpool need a killer instinct, and tomorrow's as good a time as any to find it.

7:45 EST kick-off in the States, televised live on ESPN2.