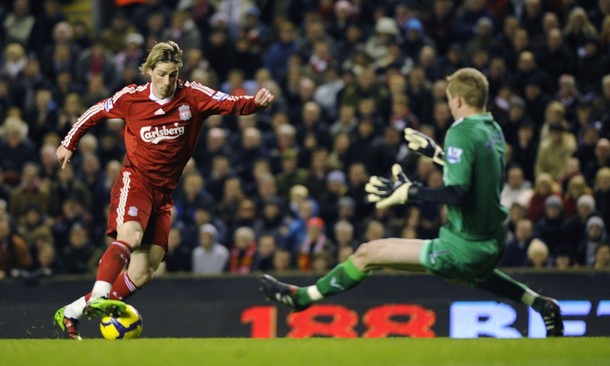 While it wasn't the type of performance that you would have hoped for on the celebration of Shankly's 50th anniversary, it's an elusive league victory and three points gained. After the misery of a lost lead Sunday, any type of performance that sees the side come out on top and fully fit (I hope) has to be viewed as a positive. But this whole borderline, I hate you-don't leave me, what if they concede a goal nervousness that's taken over needs to scram, quickly.

Wigan have played Liverpool exceptionally tough over the last couple years--in the four previous matches a total of two goals have separated the sides, and there's been seven goals scored after the 75 minute mark. While this Wigan were Steve Bruce-less (who's gone on to torment Liverpool from the Northeast), they still had the manpower to give Liverpool trouble. Maynor Figueroa's goal against Stoke was cause enough for concern, but combined with the emergence of Charles N'Zogbia and Hugo Rodallega in attack, it was clear that Liverpool would have their hands full.

Livepool's starting eleven was a bit of a surprise, with Rafa opting for a change in formation and personnel. David Ngog and Dirk Kuyt partnered up top, and Fabio Aurelio filled in the void on the left. Steven Gerrard dropped back into a more central midfield role and Yossi Benayoun was on the right side, with Javier Mascherano operating as the lone defensive midfielder. The back line also saw some shake-ups, with Carra at right back (due to Glen Johnson's lack of fitness), and Martin Skrtel and Daniel Agger in the center. Despite all these changes, the main talking point was, and will likely continue to be, the bench spot reserved for Alberto Aquilani. Who knows the full story here, but it's always going to be a mystery shrouded in a cover-up concealed with deception when Rafa's involved.

While it wasn't completely out of nothing, David Ngog's opener certainly was unexpected. Liverpool haven't exactly excelled at scoring from set pieces recently, and Fabio Aurelio's form has been suspect. Regardless, the Brazilian delivered an in-swinging free kick in the 10th minute, and Ngog glanced past a stranded Chris Kirkland. The English keeper likely could have done better, but it was another fine bit of play for the young Frenchman, who's doing his best to fill the gap created by Fernando Torres' groin.

The rest of the first half was exciting at times, but it was also marked by a number of stupid giveaways from both sides. The second half was largely similar, with a few chances created here and there. Lucas and Torres came on for Aurelio and Ngog respectively, and it looked as though Liverpool could have put the game away when Daniel Agger found himself unmarked on a Steven Gerrard corner. The Dane couldn't make solid contact with his head, and Wigan were spared. Less than ten minutes later Wigan had their finest chance of the match to that point, with substitute Jason Scotland volleying off the bar after Pepe Reina put himself in no-man's land on a free kick. In a season marked by heart break and (mostly self-created) bad luck, Scotland's miss was a welcomed reprieve.

And then in the 79th minute, gloriously, Fernando Torres looked as though he put the match to rest. Rounding Kirkland after gathering possession, Torres scuffed an effort that Titus Bramble cleared off the line. The Spaniard wouldn't be denied, however, and bundled one in to mark his 100th Liverpool appearance with a goal. The goal was met with rousing, relieved applause, and it looked to be three points sealed.

Unfortunately for Liverpool, the final minutes were a little more anxious. Charles N'Zogbia was allowed too much time on the edge of the box, and after dribbling around two or three defenders, he struck a bullet across goal to make it 2-1. Poor display by a back line that had previously put forth a good showing.

As I mentioned earlier, it still wasn't vintage Liverpool (whatever that means now), but it was a positive result for a side that sorely needed it. The longer-term fitness concerns have begun to stabilize, Javier Mascherano was immense, Alberto Aquilani looked up for it after coming on, and the fans were able to celebrate the 50th anniversary of the man who made Liverpool synonymous with winning with a win.

Three things to take away:

Liverpool can't afford to be picky right now, and building off any type of positive result is a must. Plenty of things for Liverpool to be encouraged by--David Ngog's consistent improvement, Masch's return to Monster-esque form, the ever-present threat of Yossi Benayoun, Fernando Torres' single-mindedness--heading into another tough fixture on Saturday.

Right now Liverpool have the collective emotional stability of a Miley Cyrus concert. Everything about the club seems so fragile...an injury-time goal brought about frenzied worry for the Liverpool faithful, and you get the feeling that if Wigan had equalized things would have gotten real ugly. Liverpool need a stabilizing presence, something they are sorely lacking. Not sure that Steven Gerrard is doing enough on the pitch right now to fill this need.

Maybe it's foolish loyalty to a club unaccustomed to struggles of this kind, but I truly believe that Liverpool have the time and resources to make this season a success. Sunday hit me like a ton of bricks, worse than losses to Fulham or Sunderland, primarily because it cast Liverpool off into the great unknown. So much is left to be learned about this Premier League season, and if Liverpool can continue to grind out results, there's a good chance they'll be in the discussion for European football come next season. But in the immortal words of Dr. Leo Marvin, it'll take baby steps.

And hey, look, Liverpool are going to win on Saturday. Breaking news from the future! No word if this rash will be gone by then...