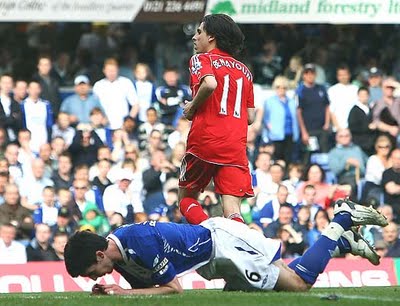 Poor run of form, you say? Every team has them. Manager on the brink of extinction? Extinction doesn't exist, just ask Kirk Cameron. Injuries spreading like chlamydia in Deadwood? Al Swearengen says injuries are for ********** **** (audio NSFW). Bring on Birmingham City.

Good news for fans stateside--this one will be televised in all its HD glory on Monday afternoon on ESPN2HD. This season has really opened my eyes in terms of the way football should be watched. Counting down the days until FSC makes the conversion.

Better news for the club as well, as it looks like many of the fitness worries are starting to right themselves. It'll still be game-time decisions for the big names--seems like Gerrard and Torres have been in and out of the operating room five times a piece in the last week based on the headlines. Rafa's also notoriously coy about the availability of players for matches, so speculating about who will or won't be available is a moot point.

Alex McLeish's side have given a fairly decent account of themselves this time around, with 11 points from 11 matches so far. Perhaps most importantly for a newly promoted side, they haven't been the victim of any blowouts. Their biggest loss was 3-1 to Arsenal at the Emirates, and that also happened to be the most goals they've conceded all year. They proved to be a bogey team for Liverpool last time they were in the top flight, forcing two 0-0 draws with the Reds in the 2007-2008 season. This campaign they're led by Chucho Benitez, clear frontrunner for hairstyle of the year, and James McFadden, the Scottish international who leads the squad with two goals in the Premier League.

Little needs to be said about the current state of Liverpool--five losses already in league, on the brink in Europe, and seemingly more injured first-teamers than fit. Obviously Monday is a must-win. Not because Liverpool need it to get back into the title race, not because they need to stay in the fight for fourth place, but because the club simply needs a good result. The memory of the 2-0 win over United at Anfield is long gone, and taking all three from a Birmingham side that will put up a good fight would do Liverpool well.

Rafa will probably field a side that is a mixture of his first-choice and reserves, with little choice to do otherwise because of injuries (see team roster) and suspensions (Degen and Carra). Birmingham are certainly no gimme--they've played organized, tough football this season, and Liverpool will have to work for the result regardless of who's on the pitch. Come Monday we'll have a better idea of who's available, but for now all eyes are on the three points. Oh, and that one match tomorrow.