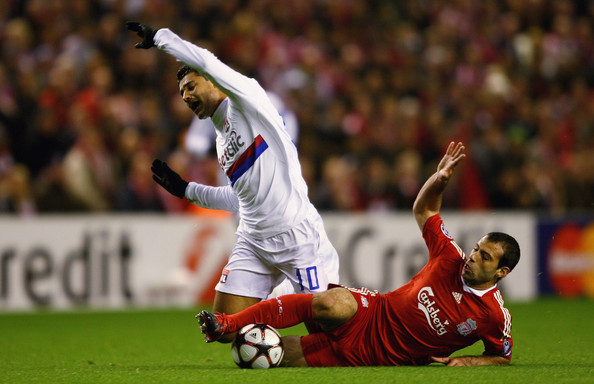 Lyon are not immune to the injury bug, outlined here by Inara. Francois Clerc, Mathieu Bodmer, Jean-Alain Boumsong, and Cleber Anderson are out, leaving Lyon with a bit of crisis in central defense.

Goals. Lots of goals. Strong in central defense. Control in the midfield. That Lucas didn't read the papers.

Those included in Liverpool's squad aren't all 100% fit--most notably Fernando Torres. Rafa seems to think that he can avoid surgery so long as he's handled correctly. Let's just hope that handling includes a couple goals today.

Looks like Carra is pushed out wide to accomodate for the missing Glen Johnson. Well played to nate at oh you beauty, who touched on this quandry in the match build-up. Hopefully the concerns are for naught. No surprises in midfield, maybe a bit of a shocker that Voronin starts in the hole behind Torres. His industry against Fulham seems to have paid off. Aquilani starts on the bench, as do Ryan Babel and David Ngog. For my money, at least two of those three will have a pivotal role to play today. Time will tell.

Cris and Toulalan partner again in central defense, and Bafa Gomis and Lisandro Lopez will lead the attack. While they're riddled with injuries themselves, they've also got the two goalscorers from Anfield on the bench--Maxime Gonalons and Cesar Delgado. Well done to Inara over at the Lyon Offside on the predictions, only missing out on Gomis.