Liverpool 2, Everton 0: A Win as Pretty as Dirk Kuyt

Share All sharing options for: Liverpool 2, Everton 0: A Win as Pretty as Dirk Kuyt 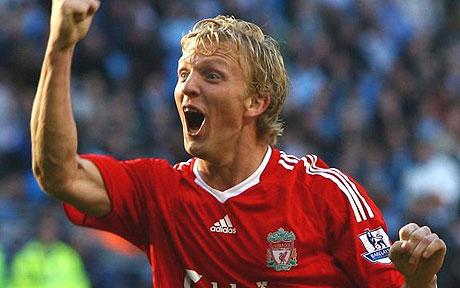 Although at this point beggars can't be choosers.

If we're going to talk about who deserved the points today, it'd be hard to argue with David Moyes, as Everton turned in a stalwart effort that was undone largely by two fateful ricochets--one on a Javier Mascherano shot that deflected heavily off Joseph Yobo, and another off the hands of Tim Howard straight to Dirk Kuyt, who slotted home the dagger. 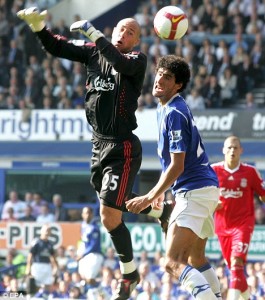 But it would also be hard to argue against Liverpool deserving the points, if nothing more than for the effort of Pepe Reina. His work today, particularly the double save against Cahill and Fellaini, was man of the match stuff, recognized by Rafa in the post-game comments. The defense as a whole was deserving, with Carra and Agger solidifying the central part of the pitch, and Insua and Johnson both putting in respectable efforts out wide.

Now's certainly not the time to get picky about the manner in which Liverpool wins matches--two wins in the last two feels good, especially considering the doom and gloom of the last month. It looks like the squad as a whole is coming back around to fitness as well, with Albert Riera and Yossi Benayoun (or Beneyenoon, according to David Pleat) both having a positive influence after coming on. Steven Gerrard is either still finding fitness or form, or likely both.

I'm still not sold on the partnership of Mascherano and Lucas in central midfield, although it looks as though Masch is trying to integrate more forward movement into his game. At times this has been a bit wild, but if he has the time and space I'm all for it, so long as he starts to get some sort of return other than a souvenir for Row Z. Lucas is still too tentative in the passing game, gives away possession too often and his attacking play is poor at best. He's certainly serviceable and has been well above average at times, but I'm not opposed to giving others **cough, cough, Alberto Aquilani, cough, cough** a chance at some point. Say, five months after purchase.

Coupled with other league results, the derby win means Liverpool and Aston Villa are level on points in fifth place, two behind an Arsenal side that were humbled today by Chelsea (although the Gunners have a game in hand). It's still premature to talk about Liverpool cementing themselves in a Champions League spot, but if they continue to grind out results in league, fourth place is not too difficult to imagine. Liverpool certainly cannot afford to look past next weekend's trip to Ewood Park, but December 13th at Anfield will be a massive one for both Liverpool and Arsenal.

No games mid-week, courtesy of a 2-1 loss at the Emirates last month, which is not necessarily a bad thing. This gives the entire squad a chance to rest a bit before visiting Lancashire, and it also allows for the ripples of a difficult month to start to smooth out.

In other news, Liverpool has been drawn against Reading in the FA Cup, a third round fixture that will take place at the Madjeski during the first week in January. Last time the Reds were away to Reading in cup competion (League Cup) Fernando Torres netted a hat trick and Liverpool escaped with a 4-2 victory. Reading currently sit one point above the drop zone in the Championship.

Lastly, congrats to Steven Gerrard, who is on the short list for the Ballon d'Or. Fernando Torres missed out on the final cut, which includes Didier Drogba, Cristiano Ronaldo, Kaka, Wayne Rooney, and three other guys who will lose to Lionel Messi.