I was going to open by stating with a certain level of confidence that should Arsenal and Tottenham draw, Liverpool would leapfrog both in the table with a win today at Fulham. Then Arsenal scored two goals in two minutes. So let's focus on Liverpool, shall we? 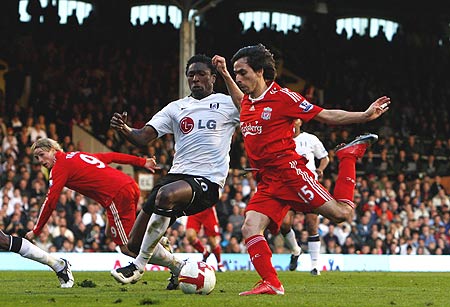 The Steven Gerrard groin injury saga spirals further and further down the rabbit hole, with worries now that he'll need surgery to repair his injured man zone. Clearly his long-term health is the most important, but it will be a massive blow to the club if he misses an extended spell. Naturally, the club and country discussion comes up, but Rafa's not having it. He's so tough.

On a more positive note (?), Lucas is out for blood today. Apparently he feels his performance against Fulham at Anfield was one of the worst of his career. Alcohol use has decimated my long-term memory, so there's no use arguing with him. Particularly with that picture of him lying on the pitch screaming. How did he get there? Why does he continue to style his hair like Ellen Degeneres? Is this actually a promo shot for Saw XIV?

Lineups will be posted when they come out, but I'm going to take a wild stab and say:

Glen Johnson's continued injury struggles present Liverpool with an ongoing problem--mostly that they don't have a true right-back to fill in. In fairness Phillipp Degen looked very dangerous against Arsenal, but I don't see Rafa installing him in the first eleven that quickly. Martin Kelly would be the likely back-up, but his injury leaves him on the sidelines yet again. Albert Riera's injury and Ryan Babel's ineptitude (had to start with an in-) make the left wing an issue, and Fabio Aurelio seems to be the only replacement. Nabil El Zhar has fallen off the map a bit this season--were this last season I'd guess he might figure in somewhere, but he appears to be AWOL so far. Yossi Benayoun will likely find himself in a very similar role as last Sunday, floating in and out of central midfield, interchanging at times with Dirk Kuyt. Fernando Torres remains Liverpool's biggest threat in attack.

As for Fulham, my best guess is timmyg's best guess. Which includes the info of which I was ignorant, that Danny Murphy will likely be out, as will Simon Davies, Dickson Etuhu, and Andy Johnson. Nice of Liverpool's hosts to try to match their body count.

Apparently Martin Skrtel is injured as well, pushing the Greek into the starting eleven, and further evidence that I am blind when it comes to "seeing" what Rafa will do. Hadn't even thought much about Andriy Voronin, but he'll pseudo-partner Torres up top. Really young set of subs for Liverpool today--the oldest is Andrea Dossena.