Arsenal 2, Liverpool 1; On to Craven Cottage

Share All sharing options for: Arsenal 2, Liverpool 1; On to Craven Cottage 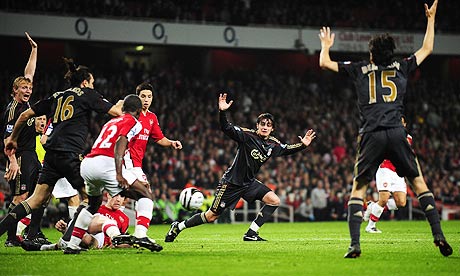 Well done to Arsenal on Wednesday, a deserved victory in a game that featured a mixture of first-teamers and youth talent for both sides, as well as the highly anticipated debut of Alberto Aquilani for the Liverpool. Emiliano Insua scored his first for the club, hitting a half-volley from about 25 yards out that left Fabianski with no chance. Not a bad way to open your account. Less than impressive work from Babel on the day...fearing that he might be losing confidence along with form. But it's the Carling Cup, so the agony of defeat is mediated a bit. It seems like the Carling Cup is the ultimate "Important if we win, not so much if we lose" competition, and Wednesday's result emphasizes that. Good result for Arsenal, mild disappointment for Liverpool, encouraging nonetheless for the eternally optimistic Rafa Benitez.

A bit of a blow today, though, as it's been confirmed that the Reds will face Fulham tomorrow without Steven Gerrard and Glen Johnson in the squad. Albert Riera and Martin Kelly are also confirmed to miss the trip. And the aforementioned Aquilani is working his way back to full fitness, but now has picked up a "virus." He was never likely to start, but it's got to be a bit of a disappointment for the young Italian if he misses the squad due to illness.

Liverpool legend Danny Murphy will assuredly feature for Fulham tomorrow, who currently sit mid-table on 11 points. Their form has been inconsistent so far this season, but last weekend they popped up with a big result at the Eastlands, fighting back from 2-0 down to split the points with City at 2-2.

Craven Cottage is never an easy place to play for opposing teams, and it will take plenty of effort for Liverpool to take all three points. Last season Fulham tripped up Arsenal and United at the Cottage, and it took a last-minute strike from Yossi Benayoun for Liverpool to escape with the win.

It's another pivotal week for Liverpool-first the trip to West London, then a huge fixture on Matchday Four of the Champions League in Lyon. Let's hope it starts off with a bang.