Liverpool v. Chelsea: History is the Enemy. Or not.

Share All sharing options for: Liverpool v. Chelsea: History is the Enemy. Or not. 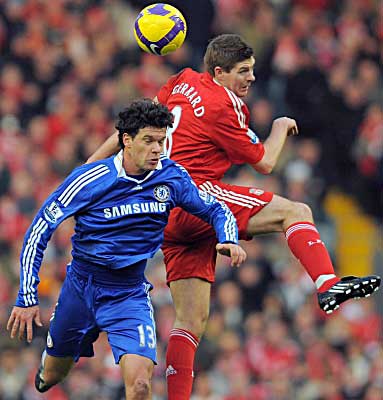 Tomorrow marks the 114th meeting between Liverpool and Chelsea since 2005, with both clubs looking to take advantage of the two points dropped by United earlier today.

For efficiency's sake, I point you to every other source on earth that has previewed tomorrow's match.

Much has been made of Chelsea's slight dip in form of late, starting with their loss to Wigan, and a less-than-convincing win away to APOEL midweek in the Champions League. And Frank Lampard's struggles to find the net are increasingly an issue, particularly when Drogba and Anelka sputter.

Liverpool are coming off a comprehensive humbling at the hands of Fiorentina on Wednesday, arguably their worst performance of the season. They had been white-hot previously, winners of six straight in all competitions. Regardless of the reasons, Rafa promises that Sunday will be a different showing. Very different. With Agger fighting back to full fitness and Mascherano apparently ready for action, the side could look very different as well. Personnel aside, Liverpool need more from all eleven, not just one or two.

Before last season the Liverpool-Chelsea matches were predictable bore-fests, usually tight affairs with one point per side the likely outcome. Two goals in two minutes from Fernando Torres at the end of their second league contest apparently bucked this trend, and the next two fixtures in the Champions League saw the teams combine for 12 goals. The first was not so pretty for Liverpool fans, but the tie at Stamford Bridge was an absolute classic.

Plenty of room for optimism for both sides heading into tomorrow, and plenty of reasons for neutrals to take interest. As the table starts to settle, it will be important for Liverpool to assert themselves as true title challengers in a Xabiless world. Apparently Carlo doesn't think it's possible.

While these fixtures haven't always been the most thrilling, the potential for a six goal thriller is ever-present, and Liverpool have the manpower to produce. Roll on tomorrow, 11:00am EST in the US on Fox Soccer Channel.