Share All sharing options for: You Mean There's More Games After Sunday? 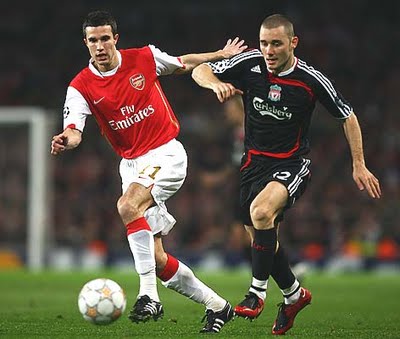 Seems like there should be a bit of a grace period after Sunday's 2-0 victory over United, but I suppose that's the beautiful, and sometimes maddening, part of football. Fernando Torres admitted what we already knew about his fitness, Glen Johnson was likely less than 100%, and the side in general could use time to soak in the most important victory of the young season. Yet Arsenal and beckons once again in the Carling Cup.

Liverpool were never likely to field a full-strength side in the Carling Cup, so any worries about aggravating existing niggles should be assuaged. The last time out in the Carling Cup, Rafa fielded a young side--Babel and Ngog (how are we spelling this now?) were the primaries up top, Jay Spearing marshalled the midfield, and Degen, Dossena, and Cavalieri were central cogs in a defense that held Leeds 1-0 at a bouncing Elland Road. David Ngog got the only goal of the game with a cool finish after Leeds had threatened for most of the match and the Reds progressed.

Arsenal and their much-heralded youngsters deafeated West Bromwich Albion 2-0, with at least seven members of the starting eleven under twenty years of age. Sanchez Watt and Carlos Vela scored for the Gunners, with Watt's strike his first for the club. There is little indication that Wenger will handle tomorrow's fixture any differently-Arsenal have led the way in bleeding youngsters in the League Cup and have been relatively successful.

The last time these two sides met in the League Cup was early in 2007 at Anfield, with Arsenal notching 6 against a Liverpool team that has largely since departed. Thankfully Julio Baptista (4 goals that night) has moved on. It'll be curious to see the selection from Rafa tomorrow-all signs point to Aquilani making his first-team debut, but Gerrard, Riera, and Martin Kelly are all ruled out. It will likely be very similar to the side that saw off Leeds, save for Mascherano, who's suspended after the red card on Sunday.

Carling Cup fixtures come with their own hint of excitement, mostly from the chance to witness younger talent on a (theoretically) bigger stage. Arsenal are a dream match-up for this very reason, and I find myself looking forward to seeing how Liverpool's younger talent stacks up against the storied youth from Arsenal.