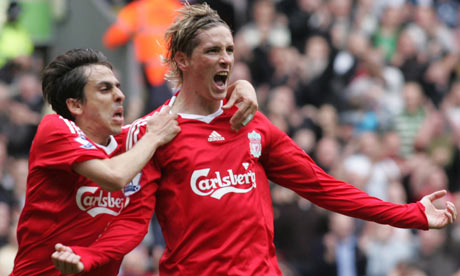 Obviously the big news is that Steven Gerrard is completely out of the squad, but Fernando Torres and Glen Johnson are fit enough to make the starting eleven. For United, Wayne Rooney is back, while Michael Iscariot starts on the bench.

First ten minutes are positive enough for Liverpool, Yossi Benayoun has been asking most of the questions. Good run of play for Lucas early as well, he set up some fine forward movement and won Liverpool a corner. Defense is looking sharp (*gulp*), Carra slicing in a few different times to cut the ball out.

Patrice Evra is going to be up against it today, with Torres floating out on that side and Benayoun calling it home. Already a yellow.

Best chance of the match so far, Aurelio's free kick is saved well by Van der Sar, and Kuyt's follow-up is also saved. Frantic minute in defense for United. Good to see.

Evra does his best to even things up, waiting a few seconds after gentle leg contact from Kuyt to crumble. Maybe it was the slow-motion view, but looked as though there was little in it.

Torres gets battered by Vidic from behind and Carra starts to plead the case that the Spaniard has been everything short of shanked. Eh, it's good for the boy, makes a man of him. And as I type John O'Shea horse-collars him.

First long spell of possession for United here, and as many opposing teams find out, apparently some shouts for a penalty after Agger comes through on Giggs in the box. Would have been a stretch I think.

Carra clatters through Carrick in the box, crunching tackle. Surprised there weren't more shouts from United, it really was pretty severe. United enjoying more in the way of attack still.

Berbatov decides to turn Kuyt's shirt into a v-neck during the battle for position on a Liverpool free-kick. Shouts for a penalty, but nothing doing. Only injury time now.

No surprises that Andre Mariner is the most popular man at the halftime whistle. All square at the break.

Back in action for the second half...gotta be a goal in here somewhere for Liverpool.

Dirk Kuyt found himself alone on the right side of the box, tough angle, decided to cut back and Yossi Benayoun couldn't make a chance out of it. Encouraging stuff nonetheless.

Great ball in by Johnson after Torres' cross is well past Aurelio. Pressure from Liverpool is kept up, I can't imagine they'll relent in the next 35 minutes.

Masch is whistled for a foul on the right side...looked like he got all ball, must be for trying to play from the floor? Giggs to swing it in...bit nervy here...Carrick at the back post, heads it back towards the middle, off Glen Johnson and out for a United corner. Giggs again, this time from the opposite side of the pitch. Cleared away with little incident.

Reina bowls one out to Torres off the back of Vidic's head. Carra clatters into Rooney at midfield as United start to push forward. Things getting a bit chippy now, should be a good last 25 minutes.

TORRES!!! Yes! Benayoun threads a great ball to Torres, who fends off Ferdinand and beats Van der Sar at the near post. 1-0 to the Reds!

Lucas, who's done well so far, with another clumsy tackle about 25 yards out. Rooney and Giggs over it...Rooney off the wall.

And on the heels of that, Lucas partners with Benayoun on a great forward run, and he looked to get out of the way of a deflection. Well done.

Masch fires on in from 20 out, corner to Liverpool. He had the numbers but took the shot. The corner clatters around, and Lucas hits one over the Kop. Twenty plus injury time.

Masch slides in late on Evra-nothing malicious, just poorly timed and he knew it. Another free-kick in a dangerous spot for Giggs, collected by Reina. Judas sheds his tracksuit filled with cash and looks to be coming on.

Double substitution for United, Nani on for Scholes and Owen for Berbatov. Fifteen-plus minutes for the former Liverpool man to break Scouse hearts. Because he didn't do that by signing for United.

Vidic gets a yellow for getting tangled with Torres, and both players continue after the whistle. Good battle between those two today.

Liverpool have to keep up the pressure, I'm not so confident they have a stout enough defense to withstand typical United late-game pressure. Wouldn't be surprised to see Skrtel on at some point to add to the back.

Ball falls to Nani on the left side of the box, his curler heads straight at Reina. Could have been worse there.

Great sliding block by Carra after Rooney shoots just outside the box. Torres with a good move on the right side of midfield, cutting back across the pitch.

Great control by Benayoun after a slicing ball by Aurelio, tries to get too cute and is dispossessed.

N'Gog readying on the sideline, will it be Torres?

Ten to play, Agger takes it away from Owen. Confirmed that it's Torres off. Good move cognitively, but emotionally not so much.

Valencia hits the crossbar past Reina...I am twitching nervously now.

Strong play from N'Gog...maybe the first time that sentence has been typed. Well done by him to fight off Vidic and put the pressure on Ferdinand.

Carra and Owen get tangled, yellow for Carra. Dangerous spot there, and now a dangerous spot for a free-kick. Giggs, Rooney, and Nani over it...Nani hits it straight at Reina.

Great track-back by N'Gog wins possession for Liverpool, Aurelio floats one cross-pitch for Kuyt, who is pushed over by Vidic. Vidic is off for the third consecutive time in this fixture. Wow.

Giggs again with the free-kick, headed away. The return service is headed over the goal by Rooney.

Skrtel on for Benayoun, who had a brilliant day. One of Liverpool's best on the year, he didn't disappoint today.

Really late whistle from Mariner there, who judged Skrtel to have fouled Rooney. A few long balls back and forth now.

Masch off! He slides into Van der Sar going after a free ball. Rightly so I think, never had a chance at the ball. Ten on ten for the finish.

N'GOG! A break for Liverpool, Lucas plays it in to the young Frenchman after a frantic few minutes. Calm finish for N'Gog, and a HUGE three points for Liverpool.

Final whistle-Liverpool 2, United 0. All is right in the world. Or at least for the day.

What a strong finish from Torres, but the ball from Benayoun was class.

I think it was a just second yellow on both counts-Masch came in high initially, and while Vidic is clearly one of the best in the world, he can also look the worst with some of his challenges. Slow-motion is especially damning here.

What a funny game, football. Two weeks of misery and complaining, present company included, is swept away with one result. Perspective is going to be key for Liverpool after this-there's plenty to address for the Reds, starting with keeping the key men fit.

Daniel Agger and Jamie Carragher were tremendous today, Carra rolled back the years (at least past the beginning of this season) and Agger was his typical no-nonsense self. Well done by them.

Fabio Aurelio impressed in midfield, despite giving away possession twice in the final minutes. He sprayed the ball around the pitch and delivered fine service from dead balls.

United's offense really looked to sputter today. I haven't seen them much this year, but it looked to be a struggle for them at times. As Martin highlighted in the comments, it could have been the fine work by Masch and Lucas in midfield cutting off the supply, but Rooney and Berbatov were never really a threat.

The most threatening possessions for United were those that started from set pieces. Liverpool gave away far too many fouls within thirty yards, and they were lucky not to concede. United certainly have the personnel to convert those chances. I'd imagine on another day they would have, just didn't happen for them today.

Other results have really gone Liverpool's way this weekend--Birmingham beat Sunderland, Stoke shock Tottenham, and Villa were held by Wolves. A West Ham win over Arsenal would really be a treat for Liverpool's standing.