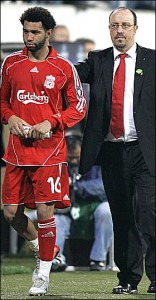 Perhaps not surprisingly, Jermaine Pennant has added onto the dogpile, criticizing Rafa Benitez for "restricting his players." Pennant struggled to break into the starting eleven consistently during his time with Liverpool but showed glimpses of brilliance from the wing, and most notably scored an absolute stunner against Chelsea at Anfield in 2007. I think Pennant would have fit well into the Liverpool side that we saw towards the end of last season, as his pace and crossing ability would have been a great asset to a team that started pouring in goals around mid-February. Granted, Liverpool did just fine without him, but the personal style he speaks of may have blended well. Probably not so much with Rafa, but perhaps on the pitch. Or on a sidewalk at 1:00am. While Jermaine's not known being the most eloquent fellow on the block, there are aspects of it that I agree with. I think he has a valid point that at times Liverpool could benefit from playing less restrictive, freer-flowing football. I'm not sure that Liverpool have the personnel right now to play Barcelona-style football, as Jermaine suggests, but Liverpool were at their best last season when they spread the pitch, moved the ball fluidly through midfield, and supplied the key men up front with quality service. But yeah, he's probably not coming back anytime soon.

In other RafaWatch news, Arsene Wenger took a break from surrendering to back Liverpool's manager, stating that he "feels sorry" for Benitez and that the criticism is largely undeserved. Martin alluded to Wenger's struggles last season in the comments section from yesterday, and it seems that Wenger's got a similar train of thought.

Jose Mourinho's name has come up in certain circles (mostly circles I'm excluded from) as the heir to the potbellied, goateed, fact-stating throne, but the Inter manager dismissed any speculation about taking over at Anfield as "impossible." I don't think I'm alone in stating that Mourinho back in the Premier League would be extraordinary, but I struggle to think that he would settle in, particularly with owners that share a squirrel's brain.

Lastly, Benitez himself seems to think things are juuuuuust peachy. In all seriousness, he does bring up a great point, whether or not it's in an effort to save his own ass. He knows how hard the team is working, he's putting in the work to make the changes, and he knows the results need to get better. I think that last part will end up being the most important, because he'll have an awfully hard time convincing his critics that effort and dedication matter more than points in the table.

Just a couple days away now from United at Anfield, preview is up over at ohyoubeauty, Fergie's looking up for it, and Fernando Torres and Glen Johnson are back in training. Back tomorrow for more, but in the meantime you can remember the joy of last season.

Times two, this from the drubbing at Old Trafford.