The Curious Case of Rafa Benitez

Share All sharing options for: The Curious Case of Rafa Benitez 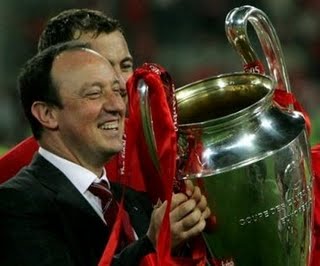 Four straight losses in all competitions. One goal in nearly a month. Injuries to four of the first-choice eleven. Fading chances (in October, no less) both domestically and in Europe. Now's as good a time as any to start listening to the Cure.

Already introduced by Rob on the Premier League Offside, the issue of Rafa's job security is one that has gained momentum of late, and if results don't start to go Liverpool's way it's a discussion that will be increasingly serious.

I really struggled with what to write here, particularly because it seems everything's been said in the past few days. The media's been all over Rafa this week, and realistically since his famous "statement of facts" in the spring. On the one hand there's Graham Greene-"Media is just a word that has come to mean bad journalism." On the other, you have Sarah Palin-if it walks, or in this case quacks, like a moose, you shoot it while the eagles fly above, great as the northern heretofore rivers flow, and such, Alaska.

Now I'm certainly not a Rafa Benitez apologist, but at the same time I don't quite yet have my pitchfork in hand. I think Rafa's been erratic, petty, and stubborn, but I also think he's brought the club some brilliant moments over the past five years. His backers blame it all on the owners, on the injuries, on the lack of money, and his detractors feel he will never push the club over the top domestically regardless of personnel or funding. He handles the media with the grace of a tank and doesn't build the most personal of relationships with his players, but he's regarded as a master tactician and "the best in the business.*"

*Statements made by George Gillett actually hold no factual backing and should be completely disregarded, but I needed another quote to round out my illustration on the polarizing opinions around Rafa, so suck it.

Now that things are all cleared up, what we're left with is...a whole lot of uncertainty. And things are about to get a whole lot messier come Sunday. United's visit to Anfield presents a major tipping point for the future--both Rafa's and the club's. A loss would present almost insurmountable pressure for Rafa, and certainly the cries for his job would become deafening. For the club, it would mean a ten-point gap from the top heading into November. They couldn't fall any lower than their current spot in the table, but the point difference would be frightening enough. How about a win then? 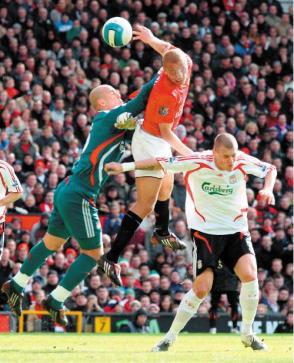 Liverpool will likely have to do it without the big guns-Johnson, Gerrard, and Torres are all fighting fitness, and even if they are cleared for Sunday it's not likely we'll see all three. The win against United at Anfield last season also saw Gerrard and Torres start on the bench, but three members of that starting eleven have moved on to greener pastures. The key, then, will be something that is supposedly right in Rafa's wheelhouse-tactics.

Which is where I sign off for the next day or so, as there is plenty to ponder in the coming days. Much of Liverpool's approach will depend on who's available, but regardless there are points to be had for the home side. Let's just hope that the past month hasn't done too much damage to Liverpool's belief, because they'll need plenty of it come Sunday afternoon. And if you believe the press, there's certainly no shortage of belief for Liverpool--from Carra to Dossena (I remember you!) to Masch, the side doesn't seem short of confidence. This hasn't always equated to results, but the ways things have gone the last month, it can't hurt.