The Least of Liverpool's Worries

Share All sharing options for: The Least of Liverpool's Worries 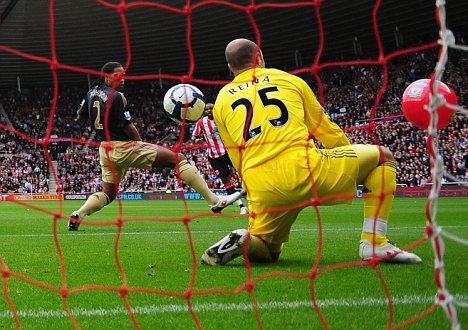 But at least it's good business for the club shop, eh?

Obviously the inflatable entertainment will be a talking point for years to come, but it's hard to say that Liverpool deserved much more than they got. In fact, I completely agree with Steve Bruce's assessment:

"I thought we deserved it, I hope that's not just going to be the headline. In the second half, we had three one-on-ones - Darren went round the goalkeeper twice, he hit the post and Reina got back and made a great save, Steed had a wonderful chance and I was just thinking, 'We need to take the second one'.

"But my goalkeeper only had one save to make - it was a good one - and overall, I thought we thoroughly deserved the victory.''

So where did Liverpool go wrong?

In theory the 5-4-1 is a brilliant match for Liverpool's personnel, full-strength or otherwise. The back line has been atrocious, and the return of Daniel Agger was always going to present a selection concern. What better way to address both these issues than to utilize three center-backs and free up the wing-backs to move forward? Glen Johnson and Dirk Kuyt have teamed up well this year, and this formation encourages more forward movement. Fabio Aurelio is not the fleetest of foot, but has been able to deliver the final ball (particularly from set pieces) time and again. This formation also allows for more space in central midfield, which has had a tendency to become jumbled on numerous occasions this year. And the focus of attack is still on the man up front, which has become Rafa's preferred method of attack.

Unfortunately theory and practice don't always match up, as we saw yesterday. While Agger and Carra were probably the top men, the rest of the "5" was poor at best. Johnson and Aurelio were dreadful, with the former looking like he's been attending the Ryan Babel school of dribbling. Aurelio's service from dead-balls was probably the worst he's shown with the club. The "space" in central midfield still managed to become jumbled, mostly due to the green but willing Jay Spearing and the unsure, slow, and short-sighted Lucas. It's clear now that Masch was fully fit, as he actually performed well after coming on late in the match. His attitude and desire to play for Liverpool, however, are a major concern, particularly with the constant rumors that he desires a transfer in the near future.

As for the ability to produce anything in attack, the earlier quote by Steve Bruce says it all. Gordon was tested but once the entire match. Dirk Kuyt, effort notwithstanding, cannot produce up front by himself. Benayoun had no creative outlet (often provided by Torres/Gerrard) and Ryan Babel just doesn't look up for it, drifting in and out of the match. Much was made in the build-up about the absence of Liverpool's world-class duo, and after yesterday some of the criticisms seem justified. But to credit this loss to the missing pair would gloss over a much bigger problem for Liverpool-the inability to present a stable, consistent effort for 90 minutes, let alone week-to-week.

One of the most annoying effects of yesterday's loss, besides not being able to order my crested beach towel, is that it presents another opportunity for Rafa to state that Liverpool are not out of the title race. Time and again, a poor result equates to defiant assertions that the Reds can still push for the top spot. But for a team that's lost four of nine and failed to score in three straight, talk of a title challenge are vastly premature.

Fortunately there's little time to dwell on the weekend. Lyon visit Anfield Tuesday in the Champions League and Sunday they'll host United in another vital league clash. With or without Gerrard and Torres, Liverpool have to find a way to get results.