Following the high of our win at St James' Park, Rafa rested Benayoun, Lucas, Kuyt & Reina. Replacing them in the starting lineup are Keane, Riera, Alonso & Cavalieri between the posts.

Gerrard was played following his little run-in with the law and produced yet another composed display.

Keane wasted another hatfull of chances and was replaced by Torres after 73 minutes. Nando showed Keane how it's done here in Anfield after linking up with Gerrard in injury time after Riera put The Reds up after 24 minutes. 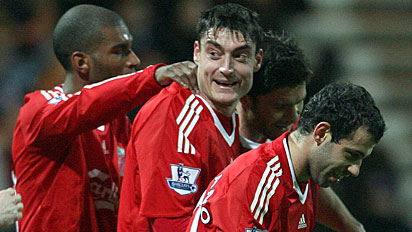 Preston put up a good fight but in the end, Liverpool managed to secure passage into the next round, where we will meet our Mersyside rivals, Everton on the weekend of January 24/25 at Anfield. This match comes a week after a similar fixture in the League.

Personally, I'm wondering if Rafa will put as much emphasis on the FA Cup as he does in the League. Would that be spreading our team too thin? What do you think?