What to expect: Liverpool vs PSV Eindhoven

Share All sharing options for: What to expect: Liverpool vs PSV Eindhoven 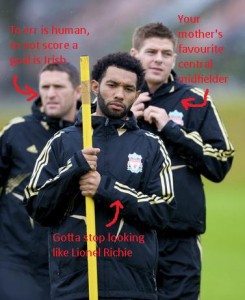 Wednesday's Matchday 2 for Liverpool will be against Dutch side, PSV Eindhoven, currently 2nd in the Dutch Eredivisie. This will be held at our fortress, so I supposed it is easy to conclude that we will win comfortably. My prediction: 3-1. It will be a Gernando show : ))

In fact I will not be surprised if PSV were to score first, just like Marseille did in Matchday 1. Our defence might be caught off-guard by the pace of the club's top scorer this season, Ibrahim Affelay. However, knowing how much Nando loves to attack at the Kop end, El Nino will be trying to bag his first hat-trick, and who knows Dirk Kuyt might sneak one in as well.

Liverpool looks to be the stronger team on paper, winning all our matches against PSV during the previous 4 encounters. But if PSV had learnt a thing or two from Stoke, they will need to park their team bus in front of the goal post, in order to stifle us at home turf.

Anyway, let's hope this will be a major goal galore for the Reds.
YNWA.