Hi everyone, I’m Nadia and I come from Singapore. Yes, that dinky island in Asia, which is currently hosting the first-ever Formula 1 Grand Prix night race. I'm here to blog about far more important things happening this weekend, such as the 208th Merseyside Derby at that narrow shithole, they call Goodison Park.

From the start, Benitez and Moyes have identified talisman Stevie G as the key player that could potentially alter the outcome of this rivalry match. For me, I singled out Tim Cahill to be the danger man, and I predicted seeing that annoying boxing-the-corner-post celebration probably once in the match. Thank God I was wrong. 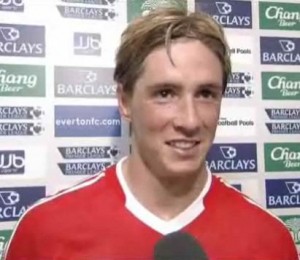 Instead, Liverpool faithful was treated to two 2nd-half textbook crowd-silencers from Kop darling, Fernando Torres, ending his 6-game goal drought. Though Robbie Keane and Dirk "the net doesn’t like me" Kuyt have yet to introduce themselves to the back of the net, they both played important roles in setting up the winners for our no 9.

Some of us may have been put off by the FA’s decision in allowing Mike "i like the colour yellow and red" Riley referee such a crucial game, but kudos to him for booking that dive from Yakubu (please ask for a refund from your coach, Ronaldo). And not forgetting, flashing the 17th red card to no 17, Tim Cahill for that horrendous 2-legged late challenge at Xabi Alsonso.

Unfortunately, Liverpool couldn’t get a 3rd against 10-men Blushites, but hey, can’t complaint about the 3 points we bagged from an away game. Perhaps the lads intended to toy around with Everton and give them the false hope that they can score 2 last minute goals. We’re charitable like that :)

So what’s next for the Reds…