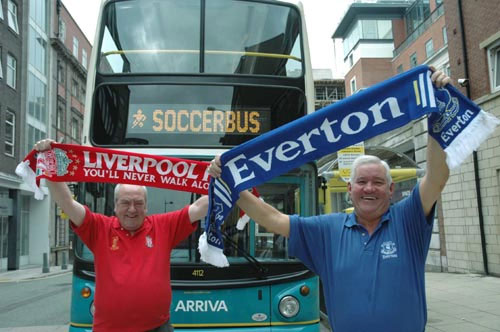 Hey kids, it's your often drunken, seldom sober, pal Chris here to tell you about this little thing we have going on this weekend called the Merseyside Derby. If you're not familiar with this extremely important contest, then do yourself a favor and jump off of something no less than 3 stories high to prevent the breeding of any offspring that would be as ignorant as you.

There's four matches in the season that are important. Two are with Man Utd (who the f*ck?). The other two are with Everton. Apparently, they think since they happen to share the same city that they are in the same "league" as us. Jamie Carragher grew up an Everton supporter and he doesn't even like you guys anymore so what does that say about you?

Last season at Goodison Park saw Steven Gerrard being pulled off for playing with too much passion. The gamble paid off for Rafa and the Reds walked away with a win. Will this season be as fortunate? Well, hell yeah. We've got our big bag of strikers that are realizing they have to score some goals soon before they get rotated out.

You want predictions? Torres will score, I will throw beer all over the living room in celebration (at 7am). Gerrard scores because even if it's a crappy shot, he will fucking WILL the ball into the net. Again.. much beer thrown in celebration, security deposit lost. And then... I'm going to go out on a limb and say that Keane grabs his first with some cheeky flick.