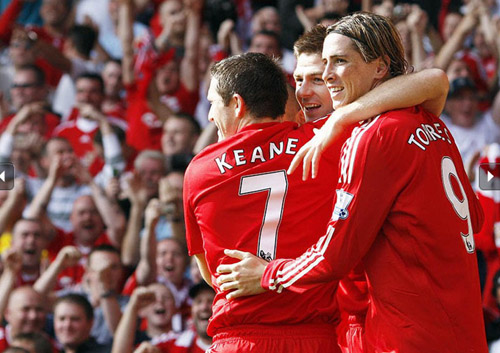 The celebration that died in vain. What a queer match. According to all of the crystal balls in the world, the Reds were supposed to hand Stoke City their ass on Saturday, but instead had to settle for a measly point.

Some would say that one of the problems was that Torres was not match fit yet. I think the real problem with that game is a combination of things. The first and most obvious would be the goal that Steven Gerrard scored off of a free kick before the two minute mark. I say scored because it was a goal, no one touched the ball as it sailed into the back of the net, yet it was recalled because--well we don't really know. So the next time you're at a match and see that Andre Marriner is refereeing it, please feel free to kick the crap out of him afterwards. It's horrible calls like this that makes people wonder about corruption and conspiracies in football. So much for that century. Maybe next time, Stevie.

You might point to Stoke parking their team bus in front of the goal as another factor. You can't really fault them for that though. They just wanted to be able to walk away with a point from Anfield and they got the job done.

The most annoying element of the atrocious showing by us was...well...us. After controlling the match and making half a billion attempts on goal, maybe two of them actually troubled the keeper. I have also never seen so many corners conceded without any resemblance of a challenge on goal resulting from them. We played like a kid on prom night that can't figure out the clasp of the bra. Maybe in training there's been too much emphasis on passing and control and they forgot to work on basics like scoring.

I would have to say my man of the match would be Rafa Benitez because if I had been on the touchline when the goal was called back, I would have stormed the field and shoved a linesman's flag down that bastard ref's throat. One positive note to take away from this is that Riera is still looking very promising. I think once that the team gets used to quality balls coming from that side, they'll be able to really capitalize on the opportunities.