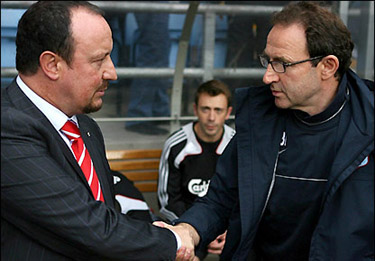 Some would agree that this was an absolute borefest while others would not. Martin O'Neil and Rafa didn't get into a scrap and Barry didn't cry so it was definitely not the grudge match we were hoping for. For me, the game pretty much ended when Torres came out with a pulled hamstring because at that point the attack threat was gone. Rafa's been trying to get this formation to work right and then, all of a sudden, the key striker is injured. Hopefully, we'll know the extent of his injury on Monday.

Neither Villa nor Liverpool really created many chances worthy of even mentioning. Villa, however, were very damned fortunate that Reo-Coker didn't pick up a red card when he took Keane down from behind in the box. Video replay showed that this should have been a red card as well as a penalty, but that's the funny game of football for you.

I was disappointed to see that Keane was pulled in favor of Benayoun when the Reds could have really done with more crosses from the wings. I was shocked to not see Babel in the game at all. If Torres hadn't been injured in the first half, maybe we would have eventually. It was good to see Mascherano back, working his ass off for the team. Alonso's corners were much better than last week, but had no one on the other end to make good on them.

I don't see us really getting into the swing of things for another six weeks or so. Right now, because of the Olympics, Euros, and just regular injuries, it's going to take a while for everyone to be healthy and on the same page. Until then, if we keep squeaking by and pick up some wins, we'll be golden. The first big test will be when United come to town in two weeks.