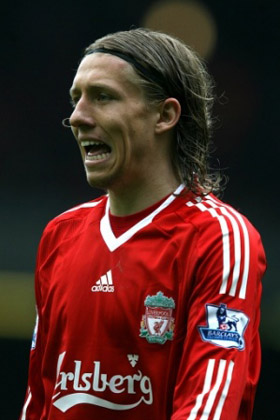 Personally, I think the whole idea is a little silly, but it's worth mentioning and wondering about. It's been suggested on message boards and speculated that Rafa gave instructions to Mascherano and Lucas that whoever was going to lose the Brazil/Argentina match would get red carded so that they could possibly get back to Merseyside before the next Premier League game.

My opinion is that Brazil was becoming frustrated and the challenge was made on Mascherano because he happened to have the ball. It is interesting though that the red card did come between two club teammates when the match was almost over. Last week's effort definitely showed that we need help in our midfield and even if Rafa didn't order it, Lucas might have figured that it would be a good way to get back to Anfield and help the team instead of playing for bronze.

It will be interesting to see if Brazil lets Lucas travel back to England or if he will be forced to sit and watch the bronze medal game on Friday. We won't ever know the answer to whether the card was picked up on purpose, but it's something to think about.
Was the Red Card Intentional?
( polls)