Wenger Says Something I Agree With. World Ends in 3..2..

Share All sharing options for: Wenger Says Something I Agree With. World Ends in 3..2.. 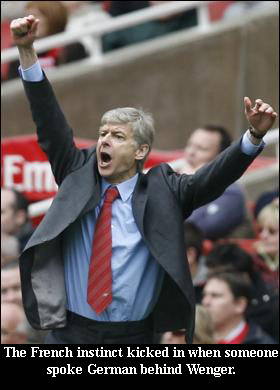 Normally, I take every chance I get to poke fun at Arsene Wenger. This is mostly because of his whiny, surrender monkey attitude, but I’ll admit he can spot and develop talent better than the majority of managers in football. So when Wenger speaks, I listen. After all, I can’t make fun of him if I’m not up-to-date.

In a recent interview, Wenger said, ""If I had the power to change anything basic in football, it would be the transfer system which makes mercenaries of players . . . If they are bad ones, they stay and, if they are good, they think only of leaving."

I couldn’t agree more. This is an age in the sport, and many other sports for that matter, where the loyalty to clubs has been replaced by loyalty to paychecks. People who support rich clubs are happy and excited when their team nabs a big signing, but this practice continues to degrade the quality and development of players. If the richest clubs buy up all the talent, it not only hurts the majority of the clubs because they do not have those players, but takes away the influence that they would have on their teammates.

Torres has hailed Benitez and Gerrard for inspiring and pressuring him to be a better player. This begs the question, if Gerrard had accepted an offer from Inter Milan or Chelsea, would Torres be the striker he is today? Now, I’m sure that some would say that the likes of Gareth Barry are doing the same, but I charge you to understand the difference of motivation. It is one thing to be motivated by new challenges and quite another to be motivated by money because money does not actually encourage results so much as reward past performance.

Motivation from money does not make a player show up and push harder than he did the day before. Wenger nailed it when he called these players mercenaries. They bring along with them discontentment and prima donna egos that disrupt when they should be uniting. This is fine though, because it will eventually come to a head. Egos will run wild and the money will run out and that’s when XI lads from Liverpool will prevail.