Share All sharing options for: Stevie G is now the smartest footballer alive! 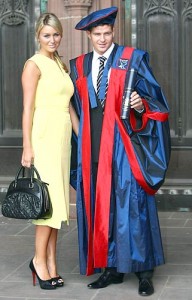 The current MBE is now also an honorary fellow at the John Moores University -- yes, the same Moores family that used to own our beloved club -- for his achievements and contributions (and domination of Everton) to the sport.

The service occured today at the city's Anglican Cathedral, and from the looks of that outfit, Steven is prepared to set sail with Christopher Columbus on a week long voyage to find some lost treasure.

So let's see here: Captain Fantastic is now the proud owner of an two FA Cup's, a Champions League trophy, as well as a fellow title, and an MBE. I wonder what could be missing? Oh yeah, how about the Premier League title!

One can only hope he'll be adding that major honour to his resume this season!