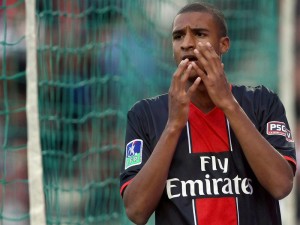 Well you can add another name to the Liverpool squad for the upcoming season. The club announced today that French sensation David Ngog will be plying his trade at Anfield after making the move from PSG. While I don't know much about Ngog, everything that I've read and seen has got me pretty excited. He's only 19-years-old, so he still has a lot of growing to do. But if his two goal performance against England last season for the French U-19's was any indication of what we might see this year, then I'm all for giving him a shot.

Like most, I trust Rafa and his judgment completely. While I'm fairly certain you'll see him playing with the reserves next year, I'm glad to see that the goateed-one will give him a chance to shine before letting him get acclimated to the English game with the second team.

It's also worth noting that he's the cousin of former Newcastle United defender Jean-Alain Boumsong, so that's a bit of interesting news since Boumsong was almost a done and dusted member of the club before he made his move to Rangers on a free transfer.