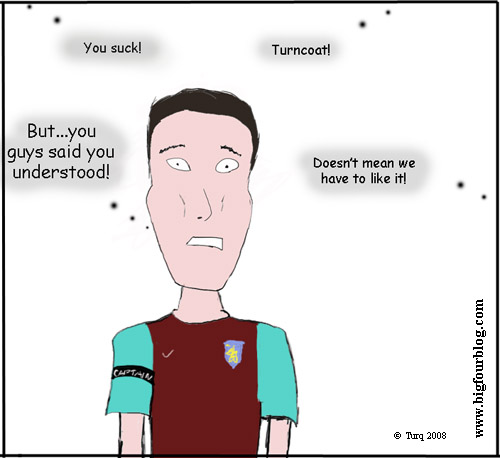 I'm not sure whether to feel sorry for Gareth Barry or not. It had to sting quite a bit to be booed by the away contingent of your own fans in a preseason match. He has reiterated to Martin O'Neil that he would like to leave to Liverpool which, unfortunately, just throws gas on the fire.

I keep thinking back to the Ronaldo v. Man U situation. Maybe I was wrong. Maybe it's really no different at all. Here's a player that's under contract who has decided he would like to play for someone else for whatever reason. Maybe the reason shouldn't matter. The principle remains that an agreement was reached and should be honored.

The differences that I keep going back to, however, revolve around the reasoning. Barry wants to play better football and maybe win some trophies that he wouldn't have a chance to get at Aston Villa and Ronaldo, well, is all about the proverbial fat cash. Either way, this situation is destined to not have a happy ending.

Aston Villa is hell bent on either raping Liverpool with an extraordinary high price tag on Barry or keeping their captain. Liverpool, is not keen to pay so much for a midfielder and seem to be shifting away efforts from Barry to try to secure Keane while Uncles Tom and George are playing nice long enough to write checks. The issue of lack of funds keep popping up as to why Barry hasn't been picked up yet. I'm not sure if that's the case. Look at it this way. Even if you have the money, you're not going to spend $25,000 on a car that you know is worth $20,000. Wasteful spending will break you quick when there are viable alternatives.

So while I feel for Barry, he's sort of brought this on himself. His pal Gerrard might have whispered something in his ear about going public with his desires to leave Villa, but O'Neil is just as guilty as he reminded us weekly how upset he was that Liverpool was moving in on his captain before the season was over and what a disturbance it was causing. I think he actually broke his own story.

Will it end? Yes and it will end in one of two ways. It will either be a last minute signing by Liverpool at the end of August because they sold Alonso to The Special One and came up with enough cash to satisfy Martin O'Neil or Aston Villa will welcome back their captain. Time and a few goals will eventually heal the wounds.