Caption this: What are Pepe and Villa talking about?

Share All sharing options for: Caption this: What are Pepe and Villa talking about? 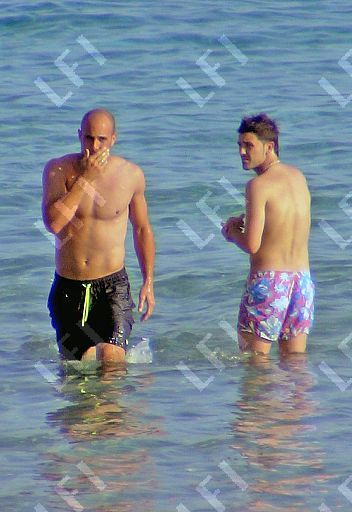 Well I'll admit the obvious today: I'm bored out of my mind. So instead of working hard on a Tuesday afternoon, I thought it would be in my/your best interest to go digging for some Liverpool truth and rumors on this glorious day. What I found would surely have to be a welcomed sight to anyone wishing and hoping for a certain Spanish striker who had at one point been linked with our club. Yes, the man you see on the right in that photo is our very own Pepe Reina taking a much needed break after winning the Euro championship. The other guy in the photo? Yep, that would be Valencia striker David Villa.

One can only hope Pepe is getting paid overtime talking up Villa about a potential move. Supposedly the two are very close. One can only hope our man was whispering sweet nothings in his ear about pairing with Torres next season.

But seriously, I wonder what Pepe and Villa were talking about. Was it a hot chick on the beach? A sea gull dropping a bomb on an unexpected beach goer? We want you to caption the photo and let us know what they were talking about. Leave your witty responses in the comment box.