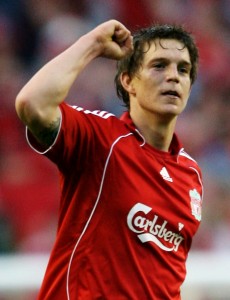 Like most Liverpool supporters, I took the time out of my weekend to catch a first glimpse of the 2008-09 squad against Tranmere in the first pre-season friendly of the summer.

While most of the current names I saw on the pitch probably won't grace the Anfield starting XI for the year, there were a particular player I was looking forward to watching. With 15 streams (yes, 15 streams!) on the internet covering a pre-season game, I had the chance to watch our very own Daniel Agger make his first start of the season in 10 months since a broken metatarsal all but killed his entire 07-08 season.

Agger made it through 77 minutes of football with no ill effects from the mended foot. After watching him struggle the entire year with the injury, I think I speak for most when I say that I was glad to just see him make it through one match. He looked really surprisingly good in what looked to be a 5-4-1 formation. Agger and the defensive backline held Tranmere in check for most of the match until about the 77th minute when he was substituted. It did look like it had been a while since Agger played a real match at game speed; however, regaining game speed will come as he puts a couple more friendlies under his belt.

If there was anything that shocked me a bit from the match, it would have to be Rafa's tinkering with using three center backs during the match. I'm wondering if this could be a possible formation for the upcoming season. All in all, Liverpool's first pre-season match of the summer got off without a hitch. The 1-0 win was nice, but seeing Agger out there was something that made me happier than anything else I saw on the day.