Manager for a Day: Who would you choose?

Share All sharing options for: Manager for a Day: Who would you choose? 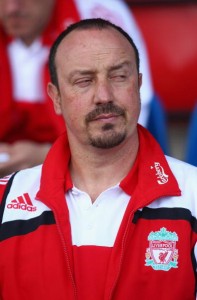 With the silly season in full swing, I wanted to have everyone put on their fake Rafa mask for one second (the goateed or non-goateed version is up to you) and pretend that you're in the Spaniard's shoes.

We know Rafa was given a current budget of £20 million from Hicks and Gillett to use on summer signings, and so far, Rafa has splashed the cash (I use that term lightly) on free transfer Phillipp Degen. So for all we know the tranfer kitty is still full.

With all the transfer rumours flying around recently, I thought it would be interesting to see where everyone thinks Liverpool will end up when the summer is over.

My proposition to you is this: First, figure out who on the current squad will actually get moved this summer. I know we all like to hope and pray that Voronin has a valuation of £25 million, and that some team would pay. But to be honest, we both know he's probably worth a couple pairs of boots and an old kit or two.

For instance: If you think Crouch is going to be sold this summer, figure out how much he would really go for on the open market, and then add that final transfer total to the current £20 million budget.

After you've figured out who is going this summer, then take the final transfer kitty (£20 + whoever you sell this summer) and figure out what your transfer budget will end up being, and who you'd realistically go after this summer (and how much you'd be willing to spend on each transfer target).

What I'm trying to figure out is, based on our current transfer funds, plus the money you get from selling players, do we really have a chance to bring in some top class talent this summer?

Could we really sign Quaresma, Bentley, Dossena and Barry? I think we can. But I'd like to see how you think Rafa can make it happen.