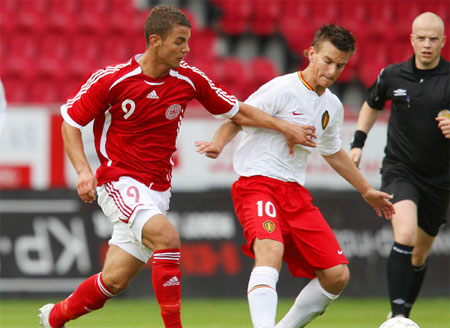 Let me be the first of many Liverpool supporters to admit the obvious: I know nothing about new Liverpool striker Nikola Saric other than the fact that he's very highly-rated. (Some say he's the top youth player on the Danish NT)

What I do know is that we did beat Tottenham and Barcelona to get his signature, so he must have some type of skill; I also found out that Rafa was beating down the door down at his local club, Herfolge, to make sure we were first in line. Rafa liked him so much that he apparently made the offer himself to Herfolge sports director Per Rud. Here's how it went down....

"'This is Rafa' he said," Rud told the club's official website. "I almost thought it was a lie!

"We are pleased and proud that Nikola has gone to one of the world's best football clubs. We would have liked to have earned more money from Nikola but his injury and the fact that his contract expired in the New Year made it difficult.

"Liverpool acted extremely well in all cases and knew all the details," he added. "They have been fair in the process and could've waited until the New Year but they will have him over now."

WARNING: Please don't drool too much over the video I found of him. Yes, it is absolutely FANTASTIC, but please remember that he still has to get acclimated to the physical English game. Any idea who he looks like in that video? (he reminds me of a lad with the initials FT.) Who says I can't get carried away with the comparisons!

So yeah, get ready Liverpool, because Nikola Saric is now part of our youth system!