Share All sharing options for: New Away Kits Officially Announced 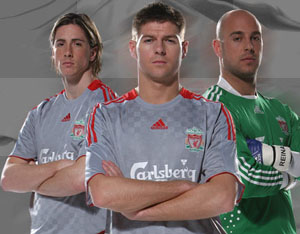 The new Liverpool away kits have been officially released and are available for pre-order and are ass-tastic. I can't believe that a group of reasonably intelligent people actually sat around a table in a room and said, "Yes, that's the one we need to go with." This is one of the most blah kits I think I've ever seen. The only character to it is the checkered pattern that sort of fades out then back in.

As for the keeper's away kit, I think Reina is going to look like a little leprechaun. Seriously, green? It makes you think that the people who design this are just throwing darts at a color wheel.

I really wish they had left this one alone, I really dug the white trimmed out in red that the club had last season. I actually bought one over the home kit because 1) it looked cool and 2) it didn't have the ridiculous collar. The ridiculous collar is now gone on all the kits, but now we have horrible colors. Just wait until the 3rd kit is released. Actually, it won't be that bad because I'm a fan of teal.

How would you rate the new away kit? This is where I'd put a poll but my free micropoll ran out and I'm too lazy to go find another one right now.