A Tale of Two Stars

Share All sharing options for: A Tale of Two Stars 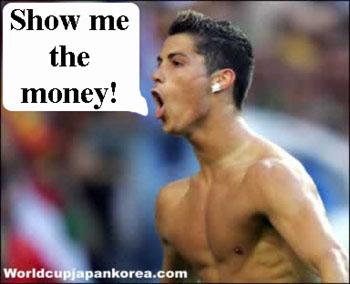 Every time I read something about Cristiano Ronaldo and Real Madrid, I can't help but chuckle a bit. It must be quite annoying to have your star player, who has the support of the fans and backing of the club, start to waffle. Real Madrid would very much like to sign the midfielder who could end all of the rumors and speculation, but would rather be greedy and risk possibly playing next season from the bench. All Ronaldo would have to do is say, "I'm not going anywhere, I'm very happy here," and that would be the end of it, which is exactly what Fernando Torres has done.

Chelsea upped their bid for Torres to £50 million. The club says that they won't sell him and Torres says he has no interest in playing anywhere but Liverpool for many years to come. That's pretty much the end of the story and as a fan, if Torres had scored half as many goals, I would pick him over Ronaldo any day just based on character. 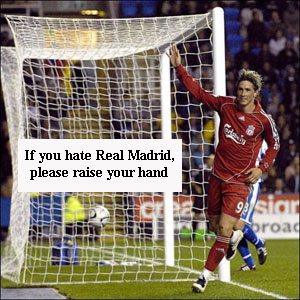 Here's a guy that knows he has a good deal. He has a manager that believes him, a club that supports him, and fans that adore him. What more could you ask for? Anything above that is greed because it boils down to how much they can make and anyone that plays for a check instead of the love of the game and devotion of the fans isn't really playing.

I'm proud to have Torres on the squad and it's great to not have to worry about whether he'll be at the club or on the bench next season. Next month will be awesome. I can't wait for him to score crucial goals for Spain so that all LFC fans can say, "That's our #9!"