The sound of silence: Where we stand so far in the transfer season

Share All sharing options for: The sound of silence: Where we stand so far in the transfer season 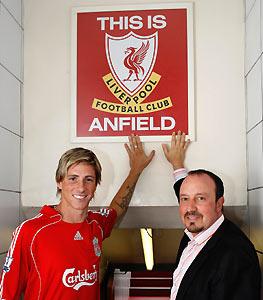 Let me be the first to say that I've rather enjoyed the silence that's gone on between Rafa, G&H and Parry over the last couple of weeks (mostly G&H and Parry). After dealing watching that mess for the better part of a six months, I think everyone would be in agreement that the silly season has brought a much needed reprieve from the mud slinging mess that is Tom Hick's PR firm.

To look back on the first couple of weeks of the transfer season takes all of a split second, and can be summed up with two words: Philipp Degen. Degen, of course, is Liverpool's only transfer signing to date. I'll be the first to admit that I was more excited about Voronin being our first transfer signing last season (yes, I feel like a total fool now) than I was of seeing Degen's name being linked with Liverpool. But like most Rafa signings, it's usually the names we don't know much about (Martin Škrtel) that end up pleasantly surprising us when we least expect it.

I've come to the realization that after going into a transfer overdrive last season with the additions of Fernando Torres, Javier Mascherano, and Ryan Babel, there is probably a pretty good chance we won't be breaking the bank this summer for another Torres. If you read the ECHO like I'm sure most of us do, you have to figure that the £20 million "squad enhancement" number that's being thrown around is probably spot-on. Why else would we only be linked currently with Udinese left-back Andrea Dossena and Bristol City centre-back Liam Fontaine? In reality, the David Bentley's and Gareth Barry's of the world will probably only be making a move to Anfield if -- and that's a BIG if -- Rafa is able to move Xabi Alonso, Peter Crouch, and a cast of other players this summer.

In a perfect world Rafa would be able to move every one of them, and would in turn be handed an extra £50 million to go after another Torres-like player. But honestly, that £50 million number is based on valuations that most teams probably won't pay. If we could get about half that number, I believe we'd be in very good shape to see Rafa bring in some big name talent.

But until we're able to start selling away some of our current team, I have to be honest with myself and know that the Dossena's of the footballing world are probably going to remain linked with us going forward. Mind you, it's not a bad thing to have squad talent, but when you're trying to fight for a Premiership title, only top quality will do.