Share All sharing options for: Liverpool complete deal for Degen 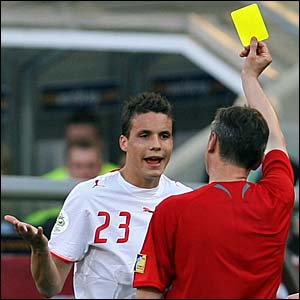 Just days after Liverpool skipper Steven Gerrard made it known that the team was falling behind in the transfer period, Rafa comes up and nabs his first signing (albeit a free one) of the summer in Borussia Dortmund right back, Philipp Degen.

I'll be the first to say that I haven't seen Degen play much of this past year, however I do know that he was part of the 2005-06 Champions League squad for FC Basel that lost in the third round of qualification to Werder Bremen, and that he started 10 games last year for Dortmund. That might be the solid news on him. What I didn't want to find out was that Dortmund conceded the most goals in the Bundesliga this season (62).

To be honest, I would have rather seen us get into the mix for a certain Brazilian right back that Chelski and the Mancs are chasing, but considering how quiet Hicks and Gillett have been on funds, who knows how much is really in the transfer kitty.

Regardless of my concern, I'll just say that I'd like to welcome Degen to the squad, and like everyone else, I'll always back Rafa and his signings until I have the chance to see them on the pitch for myself.