Someone must have informed the Reds during the interval that Chel$ski was leading by 2 goals at the Reebok stadium. 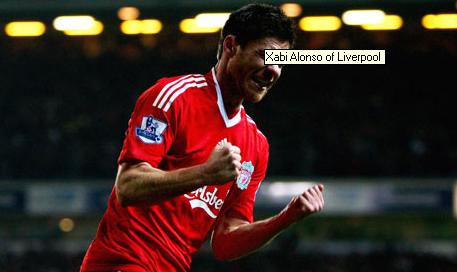 Liverpool was frustrating and lacklustre during the first half. Morten Gamst Pedersen had several close calls on goal, which unfortunately had to bring out the best out of Golden Gloves candidate, Pepe Reina. Tugay was also outstanding, and Paul Robinson had little to do, as the Reds struggled to get the ball to lone striker, Dirk Kuyt. Rotational Rafa had to call upon the services of Argentine Emiliano Insua, in the absence of Fabio Aurelio on the left (thank god it's not Fatssena). Paul Ince was probably relieved when the game ended goaless at half-time.

It nearly looked like Liverpool was about to record a third consecutive league draw when Xabi Alonso managed to send a soft kick past Robinson on the 69th minute. 10 minutes later, Yossi Benayoun redeemed himself for the missed opportunities earlier, by taking advantage of Stephen Warnock's lapse in concentration to slot in the second goal of the match, through a brilliant solo effort. Substitute Lucas Leiva conceded a corner, which the Rovers converted, thanks to a diving header by Roque Santa Cruz (hope LFC buys him!). However on the 90th minute, Steven Gerrard did us all a favour by killing the game, after Nabil El Zhar was denied by Robinson.

Blackburn has now failed to win in 10 league games, and yay, we are still on top! : )) MOTM: Steve Gerrard Gerrard

Once again, Robbie Keane was an unused substitute, and to make matters worse, there has been rumours in UK that Rafa is planning to sell off the 20 million pounds summer signing this January. Though we need to be patient with Keano's '2 goals in 15 matches' output, we are also in dire need to reinforce our striker department.

Ryan Babel's supporters may not like this, but I'm beginning to think the Dutch whiner extraordinaire is deteriorating. Sure he did score the winner against Manure, but apart from that, his performance on the pitch has been abysmal, to the point where the Manager has relagated him to a mere supersub, and apparently this is not good enough for him - something he had recently complaint to the Dutch media about not getting enough first team action. Well does the reluctant winger deserve to be in the first XI this season?

I observe that everytime Babel gets the ball, he tries too hard to dribble past his opponents...but somehow he couldn't extricate himself, and ball possession is lost. There are times when he SHOULD pass the ball but he doesn't. And it's kind of annoying to see Babel being selfish and taking shots like as if he has been deployed as a second striker.

Funny enough Liverpool banged in the goals against Blackburn after he was replaced by Nabil El Zhar. Coincidence?

Is he really the "Liverpool star those bitches are loving"? Here's Babel's own football chant: