Share All sharing options for: Riot in The Park; Red Army held responsible

And so with Chel$ki held to a 2-2 draw at Craven Cottage, we are 3 points clear heading into 2009!! I'm strangely starting to believe we might just nick it this year. 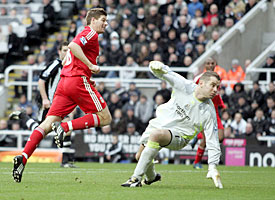 Running riot in St James' Park, Stevie G bagged a couple and created a couple more to turn in an exemplary performance by the 71st minute. Final score: Newcastle 1, Liverpool 5

In the starting line-up, Bolton match heroes Keane & Riera were rested. Skrtel was given a run-out in place of Kuyt in the 79th minute, Hyypia & DAgger in center of defence and Carra in right-back.

The opening exchange was fast and furious with Given making a few fine saves. If not for him, we'd be 20 up by half time, I reckon. His opposite number, Pepe "Butterfingers" Reina, fumbled a couple and nearly caused the pub's sleek LCD TV to be smashed by my beer glass.

Old-man Hyypia was threatening in a few of our corners and was unlucky not to grab a goal in the 16th minute. Lucas had a good run and had at least 2 great chances on goal. Given saving the Toon arse as usual.

We finally broke through at the half-hour mark and never looked back. Anyone noticed Babel's goal celebration? He seemed like he ran half the pitch, dribbling past 2 defenders, sidestepped past another 2, flicked the ball up over the 'keeper and finished off with a 360-degree, double-flip bicycle kick. Lucas has to be kicking himself for having all his nice efforts saved and then up comes Babel with a goal-mouth melee, I-just-happened-to-be-there goal.

I must give special mention to Lucas for his sweet pass that led to Stevie G's second. That was world-class! Also for an outstanding match all-round. Kudos to Benayoun for being a total pest to Newcastle down our right. Very nice cut-back for Stevie's 1st goal of the match.