Share All sharing options for: Arsenal 1 Liverpool 1: Another missed opportunity

Liverpool has made drawing games their specialty, as they failed to capitalize on 10-men Arsenal, after Emmanuel Adebayor was shown the red by Mr Howard Webb for soft challenges on Insua and Arbeloa. Which now begs the question: do we really need to hope Blueshite draws with Chel$ki tomorrow?

It was a scintillating first half at the Emirates. Samir Nasri was Arsenal’s key player, and he was responsible for that long pass to Van Persie, who brilliantly converted, almost like how Dennis Bergkamp would. The Reds answered the challenge, when appropriately, Keane, got the better of Djourou and slammed one past Almunia, minutes before half time. It was unfortunate that captain Cesc picked up an injury, and was unable to lead the kindergarten to victory.

Sammy Lee does well as caretaker manager, while Rafa is recuperating, though I wish he (or Rafa on the phone) had played 4-4-2, with Keane/N’gog and Kuyt in front, after the Adebayor sent-off. Not sure why Riera was substituted, I felt Babel was unnecessary for the game. Benayoun would have been a better choice.

MOTM for me would be Xabi Alonso. Premier League’s most accurate passer did everything right, created that goal for Keano while Stevie G had a poor game, and everyone else was giving away silly free kicks.

All I want for Christmas now is for Liverpool to maintain pole position. 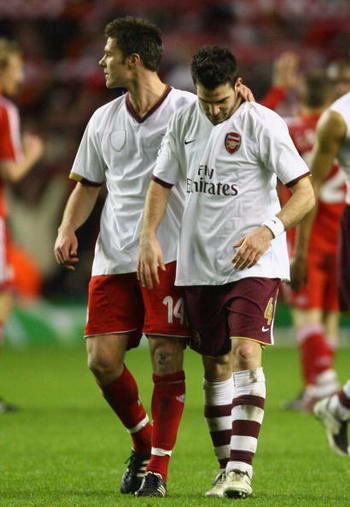 By the way, what is wrong with our kit!? Grey top and red shorts!? Someone, please fill me in on this mismatch...