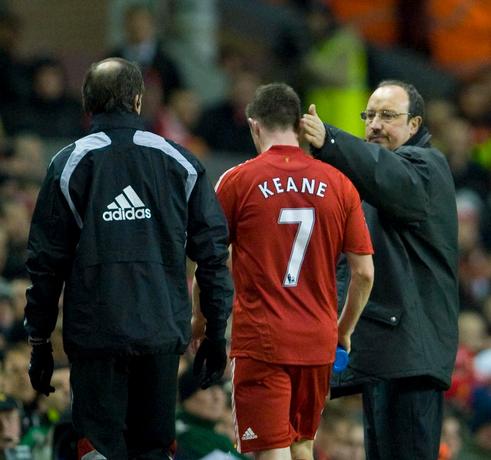 Not bad for a prediction that is running a week behind aye ;)

Steven from BigIV said it best when he wrote that Liverpool fans should stop complaining, because after all, we are now the Premier League top dawg. I say, a draw is good enough, but at the rate we are playing, it won't be long before we slipped down the table. Has anyone actually seen how Chel$ki and Manure have been playing lately? They make attacking so effortless and exciting to watch, whereas Liverpool looks so sluggish and ineffective on the pitch most of the time. So what if we have majority of the ball possession, it's useless when you don't create serious opportunities and put the ball in the back of the net. Liverpool, to me, does not look like they want to win Premiership badly. They look like they just want to get by. Goal difference will come back to haunt us.

Though I miss a good 30 minutes of the first half (yes waking up at 4am could be draggy), I don't really mind eventually, because the Reds aren't that all impressive, to be honest. Craig Bellamy looked more lethal moving forward than Kuyt and Keane combined, and Robert Green was outstanding as well, stopping Kuyt's on-target header and a powerful volley from Benayoun. It didn't help Zola decided to employ 'parking-the-entire-Bubbles-brigade-in-front-of-goal-post' tactic, he's definitely in cahoots with Chel$ki on this occasion.

Yes we should be relieved that at least we didn't give the Hammers their first win at Anfield since 1963, but do we want to be synonymous with 'stalemates', when we have quality players in the squad who are capable of 20-odd goals per season. This is Liverpool's 2nd consecutive goaless draw in the League, and what have we learnt about drawing too many matches last season?

There has been talk about Benitez bringing back former strikers (Owen and Heskey are not 'God') when the January transfer window opens. I'm not surprised if he does, because wtf is Robbie Keane doing in the 'Pool jersey anyway? Isn't this the time for Keane to prove his worth, now that Torres has been sidelined for 3 weeks? However, when the Boss replaces you with a second stringer on the hour mark, something's wrong somewhere. And Babel as second striker? Think he should stick to being a super-sub.

After all the rants, maybe it's all George Gillett's fault. He jinxed the game for us.

NO TO OWEN AND HESKEY
YES TO PODOLSKI : ))