Share All sharing options for: Liverpool 2 Hull City 2: Return of the Anfield Stalemate

In all honesty, I need to seriously watch the match again.

I have the honour to watch last Saturday's game (ok half the game) with my mate, Kai, and as it turns out, it does not take a sober person to know that we are royally screwed, seeing the lineup Rafa fielded against Hull City - the same team that defeated the Goners, has an impressive away record and is by far the best amongst the newly-promoted teams this season. Once again, Kuyt was left up front as a lone striker who is really ineffective at poaching for balls and creating goals. Also becoming a trend with the team, our 20-mil Irish signing is left to warm the bench, because

"some times more people in the box is not the answer"

So we had some defensive blunders, an own goal, and Captain Marvellous had to save us with a brace. Where did we go wrong? The Tigers trampled all over us, and poor marking by Dossena led to Paul McShane's top corner header 12 minutes into the first half. 10 minutes later, Carra then gave Phil Brown's men an unexpected dream start, by conceding a dangerous pass from Bernard Mendy (again poor marking by Dossena on the right) into his own net. Blimey! Stevie G led the league leaders with our 7th comeback act, scoring 2 goals within the span of 8 minutes in front of the Kop. Rafa's prediction of us winning the Premier League title has definitely gone down from a '80%' probability.

Zoukout beckoned, and I had to reluctantly abandon the second half. However, CSD alleged nothing much happened and I believe him
;)

It was a case of you'll never draw alone, as Manure and ARSEnal also suffered deadlocks with Spurs and Boro respectively. Let's hope the imminent return of a certain Liverpool's no 9 will further aid us in that search for the holy goals.

And thank you, Craig Bellamy!!! Chel$ki's being held to a 1-1 draw against the Hammers at the Bridge, as I'm typing this. Yay let's all drop points together! *rolls eyes

This has nothing to do with the match or Liverpool, but hope someone caught David Villa 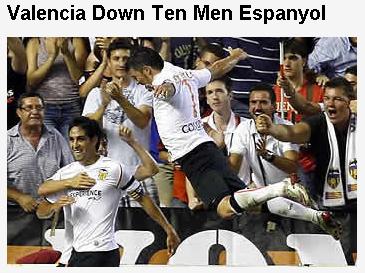