Atletico and Chelsea and Bears! Oh My!

Share All sharing options for: Atletico and Chelsea and Bears! Oh My! 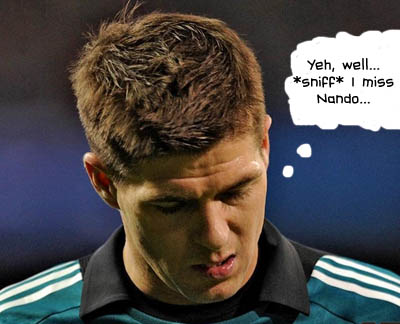 Hopefully, you caught the liveblog today. we might try to do that more often for those stranded at work.

First up, Atletico v. Liverpool today, part of the Champions League group stage. There was lots of controversy leading up to this one with the suspensions of Atletico head coach, Javier Aguirre and use of home grounds put on hold. I can understand why UEFA chose to delay the stadium penalty because it inconvenienced so many traveling fans, but to bundle the coaching suspension in with that and delay it as well is a little strange. Apparently, PSV is petitioning to play in Madrid so I wouldn't be surprised if these penalties get pushed aside indefinitely. It's really a shame since incidents of racism were obviously committed against fans and players from Marseille, but at the same time, the penalties that UEFA are trying to levy are a little tough to put into action, especially when the away teams are saying they want to play at Vicente Calderon and take their chances.

Atletico fans were on their best behavior during the Liverpool match and why not? We don't have anything against Atletico. If it weren't for them, we wouldn't have Fernando Torres. That's enough to get a free pass from us for any wrong doing for at least another season. So--racism? Violence? Firebombing? Sneaking in the middle of the night and bedding your sister? Too bad. They gave us Nando.

I think if Torres had played, the match would have had a different vibe to it. It was very slow moving until the final minutes. There's lots of controversy over who was offside when, and what penalty should have been allowed, or how the pitch was, but at the end of the day, you have to admit that based on performance alone, 1-1 is a pretty fair score line for these two clubs. Neither were playing at their best. Atletico is in dire need of a confidence boost and Liverpool didn't go all out because of the big game against Chelsea this weekend. So when you're at the top of the group table and no one else has any points, getting a draw away isn't too shabby, especially when you have a huge match looming overhead.

Now, my prediction against Chelsea? That's a tough one. Gene Hackman is using the players much differently than the Special One ever did. Instead of playing defensive after a couple of goals, he's allowing them to run rampant. Even with the number of injuries they've had, they're still performing extremely well. Sure, they've basically got two A teams to call upon, but they can be beat. Stamford Bridge is a tough place to go and this trip will be no different. But you have to think, that great form they have has to dip sometime... doesn't it?

Lastly, breaking news that is just shocking--co-owner, Ted Hicks.. is still not selling.