Carra Worries About the Youth

Share All sharing options for: Carra Worries About the Youth 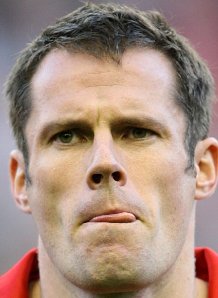 Recently, in an interview with Sky Sports, Jamie Carragher gave his feelings about the current state of the youth systems at Premier League Academies.

"There has to be something to stop that, to help clubs keep their identities. I think about when I was that age. If I'd been 18 and Liverpool had brought the Spain Under 18 captain into my position it would have been deflating.

I always thank my stars I came in just as the foreign invasion was starting. I wasn't Stevie (Gerrard) at 18. I was a very good player and would have always had the mental strength to take my opportunity, but I wonder whether I'd have been given it."

This is kind of a sobering statement to come from an elder statesman at Liverpool. It makes you wonder how much English talent is being passed over because the scouts find some kid in Argentina that the club pays a bundle for. Meanwhile, the kids at the academy who are good enough to be there and could possibly have untapped potential just get pushed aside.

It seems the Premier League has become sort of a melting pot of talent and has lost the English identity. The constant demand for top clubs to be competitive against each other and in Europe has drawn the best players in the world who are more often than not, not English. I guess if you want to watch English football you can always flip on the Championship League.

A quota system would be the immediate fix, but I really don't think that's a fair answer. I say let the money of the Russians and Arabs and Indians and Africans and whoever else wants to spend an obscene amount of dough for clubs and players that won't fetch the returns they have in mind continue to pour in. Eventually, these owners will get tired of shoveling cash into a bottomless pit and will put a halt to expensive foreign players. The Premier League economy will then suffer a correction where the salaries drop very low and more than likely, talent will goto Spain and Italy. But that's how economics goes.

If the FA is smart, they'll provide incentives for developing local talent instead of putting quotas on the starting XI. The problem starts at the bottom with encouraging kids to go kick a ball in the park instead of playing on their Xbox. Then again, maybe we just need to ship a crap load of Xboxes to Brazil and Argentina. Damn, just pulled that out of thin air. You can thank me for saving English football later...